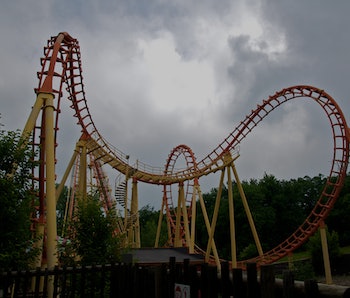 Cedar Fair Entertainment Company, which owns and operates fourteen amusement parks in the midwest and California, has announced plans to bring virtual reality to its slushy slurping customers. And those plans involve making a virtual space in the most famous roller coaster-centric park in America, perhaps the world.

This isn’t a new carnival trick, mind you. Attractions purporting to be VR roller coasters have been around for some time. But most of these attractions have consisted of little more than rumble seats installed in theaters showing 3D movies. That’s fun, but it isn’t really virtual anything.

At Cedar Point, Cedar Fair wants to go one step further and test VR capabilities on an existing coaster, which makes the possibilities actually mind-blowing. Imagine how disorienting it would feel to see a coaster going one way but actually feeling it go another way? The visuals could also be changed regularly so no ride will ever be the same.

The park is saying that it wants to move people through actual as well as virtual space. That’s pretty wild because it means that roller coasters will no longer look like what they feel like. They’ll be tools for creating a totally different experience.

This kind of business model could mean big bank for the parks themselves, who would rack up money from people constantly coming back to ride the same coaster with a different experience — over and over again. But then again, thousands of people wearing Oculus Rifts or some other VR display on a sweltering summer day at an amusement park would be outrageously gross, not to mention the fact that any of the bulky headsets could come flying off during a 360-degree loop and pose a safety risk to anyone unlucky enough to get a Rift to the face. The real question, though, is if it will really work.

The process of outfitting a coaster with VR is still in the preliminary stages, and Cedar Fair’s VP of Corporate Communications, Carolyn McLean, told a local news station any testing would be closed to the public. But the tests would most likely happen at either one of the Ohio-based company’s parks in that state: Wildwater Kingdom in Aurora and Kings Island in King Mills.

More like this
Gaming
8.3.2022 6:00 PM
We Met In Virtual Reality offers a hopeful but flawed vision of the metaverse
By Willa Rowe
Innovation
8.5.2022 6:30 PM
This breakthrough stem-cell therapy could reverse genetic blindness
By Charles Q. Choi
Innovation
8.12.2022 9:30 AM
Indoor lights make us sick — this technology could fix that
By Miriam Fauzia
Related Tags
Share: