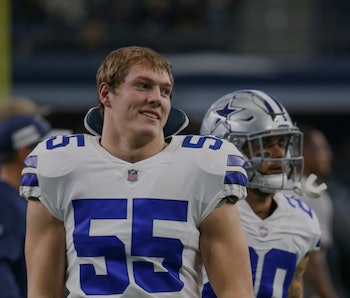 Strength meets strength when the Seahawks fly south to take on the Cowboys in prime time tonight. Seattle finished the regular season with the most rushing yards in the NFL, bolstered by a revamped offensive line and the emergence of Chris Carson at running back, who finished racked up over 1,100 yards and nine touchdowns on the ground. Meanwhile, Dallas finished with a top-five run defense, due in large part to the stellar play of linebackers Leighton Vander Esch and Jaylon Smith. As the talking heads love to say, something has to give here, and whichever team can win this particular battle in the trenches will go a long way towards securing a victory in tonight’s game.

If they do need to pass the ball, the Seahawks also boast the aerial wizardry of quarterback Russell Wilson, who has spent the season dropping dimes as if NFL defenses were the Fontana di Trevi. Seattle’s receiving corps has provided Wilson with a bevy of options to throw to, including the transcendent talents of Dougie B and the emergence of Tyler Lockett.

Wilson had a perfect passer rating of 158.3 when throwing to Lockett this season, a remarkable statistic that will not soon be replicated. On the other sideline, Dallas has a difference-maker of its own: star wideout Amari Cooper, who has revitalized the Cowboys’ moribund offense after being acquired via trade earlier this season.

Which brings us to tonight’s game. The Seahawks lost their first two games of the season, but closed out the campaign by winning six of their last seven, including an epic win over the Chiefs in Week 16. However, Seattle has looked somewhat shaky in recent weeks, having lost to the lowly 49ers in overtime the week before the win over the Chiefs, and narrowly escaped from the Cardinals in the final game of the season.

The Cowboys also surged over the second half of the season and into the playoffs, winning seven of their final eight games, but has also looked mortal after edging the Eagles in overtime back in Week 14, having no-showed in a scoreless defeat to the Colts and narrowly edging the hapless Giants in the final game of the season. What’s the final call? We’ll roll with Wilson, who has the edge in terms of playoff experience over Dallas quarterback Dak Prescott, in a tight game and mild upset. Seattle is looking “DangeRuss,” indeed. Seahawks 24, Cowboys 21, is my prediction, but how does a hive-mind of NFL experts predict this NFL playoff match-up turning out?

To predict the result of this 2018 NFL post-season match-up, Unanimous A.I. used what’s known as swarm intelligence. A “swarm” of 37 NFL enthusiasts worked together as a hive mind to make their prediction, and as you can see in the animation below, each participant controlled a golden magnet and used it to drag the puck toward the result they thought was the most likely outcome. This is where it gets interesting: As a user sees the puck move toward a particular decision, it triggers a psychological response. They might readjust their thinking as the group builds toward a consensus. It’s an artificial intelligence, produced by human brains, working together as a swarm.

As the replay above shows, the NFL hive-mind created by Unanimous A.I. disagrees with my prediction. The swarm has low confidence the Dallas Cowboys will begin their playoff run at home against the Seattle Seahawks with a win.

The Seahawks play at the Cowboys at 8:15 p.m. Eastern Saturday on Fox.