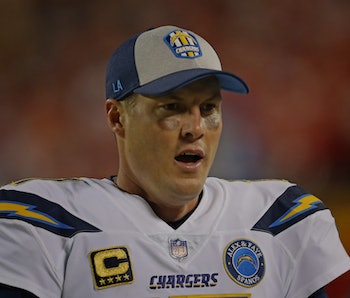 Can Philip Rivers finally get a ring? Throughout his career, the San Diego Los Angeles Chargers’ quarterback has put up gaudy, Hall-of-Fame-worthy numbers, but a Super Bowl victory remains the one achievement that has eluded him. Rivers will get another chance to pursue the Lombardi Trophy when the Chargers head east to take on the Ravens in this afternoon’s wildcard game.

On the other sideline, of the League’s fiercest defenses awaits Mr. Rivers & Co. Baltimore surrendered the fewest total yards in the NFL this season, the second-fewest amount of points, and is top-five (or better) in virtually every statistic. Yikes. The Chargers managed to put together a 12-4 record and have had a heck of a season. Even so, the Ravens field that fearsome defense and won six of their final seven games (and the AFC North division title) after substituting rookie sensation Lamar Jackson at quarterback for the decrepit Joe Flacco.

These two teams met just two weeks ago. The Chargers had just come off of a Thursday Night Football win over the Kansas City Chiefs and looked like the new Team to Beat in the AFC. Then the Ravens picked them apart, holding the Chargers’ offense to a paltry 10 points. Sadly, we see more of the same in store tonight. Sorry, Phil – some things just aren’t meant to be. Ravens 24, Chargers 21, is my prediction, but how does a hive-mind of NFL experts predict this NFL playoff match-up turning out?

To predict the result of this 2018 NFL post-season match-up, Unanimous A.I. used what’s known as swarm intelligence. A “swarm” of 37 NFL enthusiasts worked together as a hive-mind to make their prediction, and as you can see in the animation below, each participant controlled a golden magnet and used it to drag the puck toward the result they thought was the most likely outcome. This is where it gets interesting: As a user sees the puck move toward a particular decision, it triggers a psychological response. They might readjust their thinking as the group builds toward a consensus. It’s an artificial intelligence, produced by human brains, working together as a swarm.

As the replay above shows, the swarm has low confidence that the Chargers will win against the Ravens on Sunday and continue their post-season march.

The Chargers play at the Ravens at 1:05 p.m. Eastern Sunday on CBS.