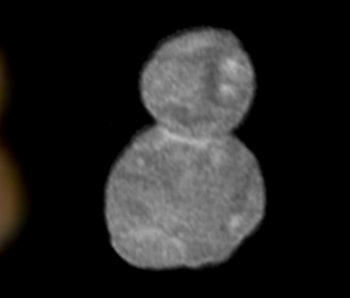 For all the excitement about Ultima Thule, the unprecedentedly distant space object that made history with NASA’s New Horizons probe on New Year’s Day, we were never quite sure what it actually was. From 4 billion miles away, it kind of looked like a bowling pin-shaped rock, but it also resembled as two icy balls, traveling together. The first images of the historic flyby, released by NASA on Wednesday, suggest the true description lies somewhat in between.

Ultima Thule, the farthest object ever reached or imaged by human spacecraft, is indeed a single object, but the photos suggest it appears to have been formed, snowman-style (BB-8 is also a popular comparison), from two pieces that slowly stuck together. During a press briefing Wednesday, NASA researchers revealed that these pieces have icy surfaces that most likely appear red because of deep-space radiation, much like Pluto. NASA confirmed confirmed that Ultima Thule is the first so-called “contact binary” ever explored by a spacecraft.

"It’s a snowman, if it’s anything at all.

“That bowling pin is gone,” New Horizons principal investigator Alan Stern, Ph.D., said in the briefing. “It’s a snowman, if it’s anything at all.”

Though we commonly hear about galactic objects slamming violently into each other (how else would the epic Cosmic Rose have formed?), a contact binary comes together through a far more gentle action — more of a kiss than a crash.

According to NASA’s latest report, the two spheres that make up the object (the bigger one is Ultima; the smaller is Thule) “likely joined as early as 99 percent of the way back to the formation of the solar system, colliding no faster than two cars in a fender-bender.”

Other contact binaries include the asteroid Itokawa, which was the first asteroid from which humans ever retrieved samples. This otter-shaped object could have been formed from two piles of space rubble, a “head” and a “tail,” that “eventually bumped gently into each other and stuck together” because of “slight mutual gravity,” according to NASA.

Another proposed contact binary is Comet 67P/Churyumov-Gerasimenko. Photos shot by Rosetta in 2014 showed a strangely lopsided shape consisting of two lobes attached by a narrow neck.

Stern said in a December blog post that Ultima Thule’s icy lobes probably coalesced over 4.5 billion years ago right in the middle of the Kuiper Belt, which is so far out from the sun that the temperature is close to absolute zero. Because it formed there and has likely not changed much in structure over the millennia, it gives scientists a better idea of what constituted the earliest building blocks of our solar system’s planets.

More like this
Science
3 hours ago
How the Webb Telescope could unveil the newborn universe
By CAROLYN COLLINS PETERSEN and Universe Today
Science
8.12.2022 10:00 AM
45 years ago, the first Space Shuttle made history without going to space
By Allie Hutchison
Science
8.7.2022 11:00 AM
Webb Telescope discovers an “amazing” galaxy from the edge of time
By LAURENCE TOGNETTI and Universe Today
Related Tags
Share: