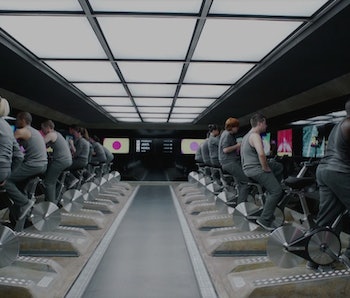 Gamification is what would happen if a marketing exec were in charge of selling the human condition: You know what people hate? Exercising! Meeting with their physicians! Putting on pants! But you know what humans are obsessed with, or at least something I saw that got Twitter really jazzed like two months ago? Feeding a bunch of stray cartoon cats on their phones! Let’s try to make life more like that! Because we are now in a place where technology and social networks let us incorporate game-like systems (achievements linked to rewards or leveling up), the marketing department has won. And one of the first in line to blur? Gyms and arcades.

At its most reductive, the earliest games were exercises in forms of physical competition. The new wave of gamified exercise pits player, not against player, but software. That could be the pastel encouragement of a Wii Fit, or as dramatic as sensory overload of a new Museum of the Future installation in the United Arab Emirates called Fitzania.

What separates Fitzania from your Wii Fits is that it collects biometric data and whisks that information off to a physician to be analyzed. “The angle we were going for was, most kids don’t get enough exercise,” Dr. Noah Raford, UAE Strategic Projects Department advisor, told Fast Company. “The user experience of going to the doctor is terrible and scary to most [kids].”

Whether doctors will be able to parse this information into useful diagnoses is a bit speculative (though decentralized healthcare, thanks to technology companies like Tyto, may be on the horizon). Regardless, you can most definitely get people to sweat in a game-like environment.

The killer app of gamified exercise that Fitzania doesn’t quite tap into? Leveling up your social network. In a recent study in the journal Computers in Human Behavior, Finnish information scientists argue that, “people indeed do ‘work out for likes.’” Because in the dystopian future of Facebook, it’s just a bunch of guys liking each other’s profile pics on and on into swole infinity. For what good’s a high score if you’re the only one playing?