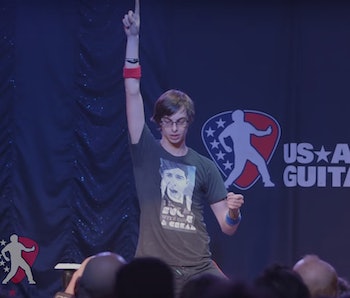 These are dark, wintry years for rock music. You’re as likely to see a rock album top the Billboard charts as you are to see Fred Durst on the cover of Rolling Stone again. Coldplay was the biggest selling rock record of 2014. Coldplay. And the most attention anyone pays to the genre in a world of Meek Mill and Drake beefs is when Lenny Kravitz’s dick pops out onstage.

In that darkness, the U.S. Air Guitar Championships are a conch, carrying the flickering fire of rock’s spirit. This weekend in Portland, Oregon, we crowned a new leader to carry that fire, and his name is Airistotle. Or Matt Burns, to civilians.

This is not some amateur operation, dammit. Qualifying matches are spread across dozens of major U.S. cities, judging competitors on technical merits of their air shredding, stage presence, and that indefinable quality of “airness.” Airistotle, laying down the Ace of Spades in all three categories, just took his second consecutive national championship. From here he goes to Finland, where the Olympic village of international air guitar gods will compete for the world prize, which I can only assume is some sort of Highlander-style quickening. Or at least that seems like a probably source for Airistotle’s high voltage, Bon-Scott-in-Mime-School-On-Hour-50-of-an-Amphetamine-Binge performance style.

Respect to the fallen soldiers, the air heads who won’t be making it to Finland, but who have nonetheless elevated an art form. Especially you, mom jeans.