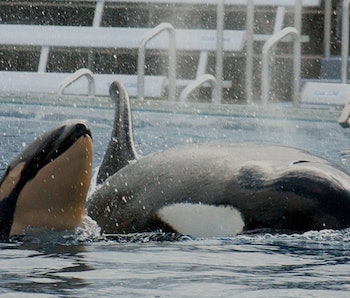 Has any documentary been as damaging to a company as Blackfish has been for Sea World? Since the film was released in 2013, breaking hearts with its stories of animal mistreatment so terrible it provoked violence and the deaths of three people, the parks’ profits have collapsed — by 84 percent in the past year alone. The company has blamed its sinking quarterly support as the result of “continued brand challenges,” which is technically true since it is challenging when your brand is associated with torture.

As The Guardian reports, attendance is dismal, half the company’s market value is gone, its former CEO was pushed out, and there seems no reversal in sight.

In real dollars, the park made $37.4 million in net income for its second quarter last year. This year it reported $5.8 million.

Sea World is fighting. It has even gone so far as to hire veterinarians for an ad campaign talking up their humane practices, which they assure us in no way drastically shortens the life of its attractions. Though at this point it feels a little bit like Mad Men-era cigarette companies running campaigns with three out of four doctors promising cigarettes are perfectly safe with the right filter.

More like this
Culture
Jan. 14, 2023
2,454 years ago, one eerily familiar event led to the downfall of Ancient Athens
By Rachel Hadas and The Conversation
Innovation
Jan. 19, 2023
A robot choreographer reveals why M3GAN — and all robots — should dance
By Molly Glick
Culture
10 hours ago
A 2011 Jake Gyllenhaal thriller reinvented the time travel movie
By Alex Welch
LEARN SOMETHING NEW EVERY DAY.
Share: