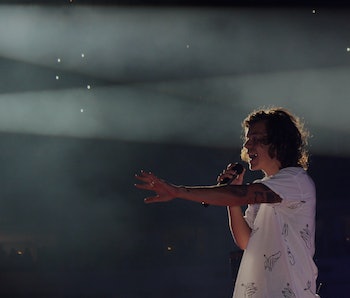 I never wanted to be a One Direction fan. By the ripe age of 25, I’d packed up my braces and insecurities, making room for the sort of cerebral indie rock cool adults dig. I left the sappy for the sad, but I did so without factoring in how fucking hard life would be.

That’s how they got me.

One Direction wants — or wanted — to make things simple. There’s no need to analyze song structures or assess their looks or suss out meaning from their lyrics. People try, but they’re missing the point because there is nothing there to understand. The only thing these five (now four, RIP Zayn) tittering monkeys ever ask is for you to join their bouncing giggle party for a three-minute, forty-second romp at the top of the hill above the uncanny valley.

They hooked me with “Kiss You.” At the time it was released, I was going through a particularly confusing patch of my mid-twenties, but in 1D world life’s vagaries don’t exist. They wore sailor suits in the video. They wanted to make out. I felt that.

Three years and many crises later, One Direction has become my opiate, a party bus to a rosy cloudland of earnest emotion and pure enjoyment. There’s nothing as life affirming as a quick hit of “Live While We’re Young” and I’ve numbed an existential crisis or two with “Story of My Life.” I once cried on a plane to “Don’t Forget Where You Belong.” I take my catharsis straight to the vein.

And then there is the concert experience, a sort of detox for the post-modern soul. Surrounded by tens of thousands of die-hard fangirls feeling all the feels, there’s no one to judge you for screaming and flailing until you black out. It is awesomely therapeutic.

At their MetLife Stadium show this week, Harry Styles stood at the front of the stage like a omnipotent wizard and commanded the crowd to scream as loud as they could. They did. We all did. The sonic blast carried our anxieties, angst, heartbreaks, and woes high into the sky above New Jersey, where he exploded them into shimmering fireworks with a wave of his magical hand.

The boys can convince us that everything’s great because, as four handsome, mostly talented, happy youths, everything is great. But the curse of being an older fan is knowing what they’re about to go through. Hovering somewhere between 21 and 23, the boys have just entered adulthood, and though they bravely wear their carefree smiles onstage and on screen, the cracks are starting to show, and it is heartbreaking.

The stresses of fame led Zayn to leave the band earlier this year, and Louis just got a girl pregnant. Niall and Liam, no doubt concerned about their future, desperately want One Direction to be a serious band, slipping in guitar riffs and vocal runs whenever they can. Harry, somehow, doesn’t seem to worry about anything, perhaps because he’s already achieved legend status as this generation’s Mick Jagger. But then again, look what happened to him.

What One Direction really offers is respite, packaged in song form and delivered by way of four charming, tattooed reminders of simpler days. As long as the boys stay convinced of the fiction that life is easy and carefree, they’ll continue to deliver. How long can that last?