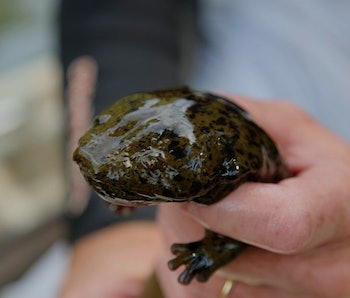 After their Chinese and Japanese freshwater brethren, these salamanders are the largest in the world. Behold these photos, proudly displayed like specimens that had been lured away from the time when lizards flew and dragonflies were the size of dinner plates on the Arkansas Game and Fish Commission Facebook page today:

Let the many names of the hellbender flow over you in a mud bath of nomenclature. The hellbender is also the snot otter, and the grampus, and the mud-dog, Allegheny alligator, leverian water newt, or the Cryptobranchus alleganiensis.

They have been compared to dragons, but they are more Bilbo Baggins than Smaug, cautiously selecting a rocky hole in the river bottom where they’ll stay for years, invisible except for hungry heads hoping to snag unsuspecting crayfish. The well-fed grampus will live to the ripe age of 30.

But, like the ancient wyrm facing down St. George’s blade, the future of the hellbender looks grim. The Ozark hellbender subspecies is now found only in Arkansas and Missouri. The International Union for the Conservation of Nature lists hellbenders as “near threatened,” citing habitat loss and declines of up to 30 percent every three generations. As skin-breathers, the critters are susceptible to poor water quality and disease.

And yet in the darkness gleams a thin, opalescent mucus-strand of hope. A few hearty herpetologists and wildlife conservationists, so moved by the squishy beauty of the beast or perhaps its ecological value, aren’t going to let the hellbender descend into a historical footnote quietly. They’ve turned to new technological sleuthing techniques — such as looking for whispers of amphibian DNA in the water — rather than disturbing the hellbender’s rocky holes to see where the animals are making a stand. Thanks to breeding programs like that at the St. Louis Zoo, reintroduction efforts are underway. The odds of winning this fight is not great, but that’s simply par for course when dragons are involved.