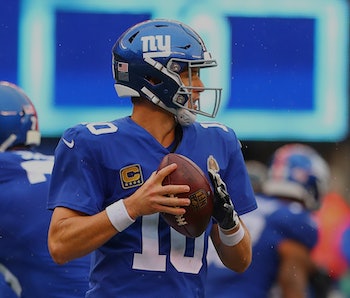 The top of the NFC North faces off against the bottom of the NFC East in this lopsided matchup, which pits the Bears, who are enjoying an inspired season, against the Giants, who are the languishing in a miserable one. At this point, the Giants are finding new ways to lose, often in the most head-scratching manner. Last week against the overrated Eagles, the G-Men put up 346 yards of offense in the first half, only to become overly conservative with their play calls during the second half, en route to allowing Philadelphia to storm back from a 16-point deficit and win 25-22 on a fourth-quarter field goal. In choking away their lead, the Giants violated the number one rule of football: if it ain’t broke, don’t fix it.

As you might imagine, diva wide receiver Odell Beckham Jr. had some thoughts about it. Just because he’s cray-cray doesn’t mean he’s wrong. If you’re the Giants, at this point in the season, you have to wonder: is it worth winning this game? Or any of the remaining games on the schedule? At 3-8, the division title is out of reach and a wild-card berth is likely too. Any wins by the Giants will amount only to meaningless Pyrrhic victories which will worsen the Giants’ first-round pick in next April’s draft. The Giants are very much in win-the-battle, lose-the-war territory.

Meanwhile, da Bears continue to gorge themselves on the carcasses of NFL bottom-feeders and carrion, having won five in a row against the likes of the Jets, Bills, and Lions (twice). In putting together their win streak, Chicago has proven that you can go places and make a lot of people happy simply by beating the terrible teams on your schedule. Chicago also received a spiritual boost following the news that legendary former head coach Mike Ditka was out of the hospital following a scary heart attack. Now that Coach Ditka is safely out of the woods, we can only assume that he willed himself back to good health in the classic manner of Bears superfans everywhere.

While the Giants aren’t having much fun these days, the Bears have embraced head coach Matt Nagy’s innovative offensive schemes and are having a ball playing backyard football out there. Let the fun (and feasting) continue. Bears 27, Giants 24.

To predict the result of this Week 13 match-up, Unanimous A.I. used what’s known as swarm intelligence. A “swarm” of 34 NFL enthusiasts worked together as a hive mind to make their prediction. As you can see in the animation below, each participant controlled a golden magnet and used it to drag the puck toward the result they thought was the most likely outcome. This is where it gets interesting: As a user sees the puck move toward a particular decision, it triggers a psychological response. They might readjust their thinking as the group builds toward a consensus. It’s an artificial intelligence, produced by human brains, working together as a swarm.

As you can see, the swarm has high confidence that the Bears will win on the road against the Giants on Sunday, with 93 percent “brainpower.”

The Bears play at the Giants at 1 p.m. Eastern Sunday on Fox.

More like this
Mind and Body
5.7.2022 12:00 PM
Barbell exercises might not work for everyone – here’s what to do instead
By David Rogerson and The Conversation
Innovation
5.16.2022 9:00 PM
Boeing’s Starliner spacecraft takes another shot at the International Space Station
By Claire Cameron
Innovation
5.16.2022 10:30 AM
Bentley Flying Spur Hybrid review: Price, specs, and one annoying thing
By Jordan Golson
Related Tags
Share: