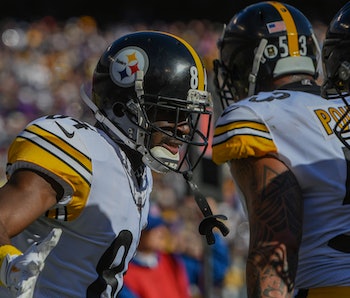 The Steelers head Mile High this weekend riding a six-game winning streak to square off against the Denver Broncos. After trailing the Jaguars for most of last Sunday’s game, the Steel Crew managed to put together a comeback and score two unanswered touchdowns in the final frame to edge Jacksonville, 20-16. Quarterback Ben Roethlisberger’s goal-line sneak in the waning seconds of the game was emblematic of Pittsburgh’s day in Jacksonville, as it didn’t come easy and the Steelers juuust barely managed to squeak by the Jags. Even so, at this point in the season, all that matters is getting those elusive Ws, wrapping up the division title, and getting as many home games as possible in the playoffs.

The Steelers are 7-2-1, good for a two-and-a-half game lead atop the NFC North Standings. This week’s game against the Broncos provides another opportunity for a solid win before Pittsburgh faces off against the Chargers in prime time on Sunday Night Football in two weeks. For their part, the Broncos sit in third place in the AFC West, with a record of 4-6. As they are four games back from the Chiefs with only six left to play, the AFC West title is likely out of reach, but the Broncos remain dangerous and can no doubt play the spoiler role against Pittsburgh, as the Broncos did last week by upsetting the Chargers 23-22. Steelers 24, Broncos 20 is my prediction, but how do a hive-mind of NFL experts see this one turning out?

To predict the result of this Week 12 match-up, Unanimous A.I. used what’s known as swarm intelligence. Some 26 NFL enthusiasts worked together as a hive mind to make their prediction. As you can see in the animation below, each participant controlled a golden magnet and used it to drag the puck toward the result they thought was the most likely outcome. This is where it gets interesting: As a user sees the puck move toward a particular decision, it triggers a psychological response. They might readjust their thinking as the group builds toward a consensus. It’s an artificial intelligence, produced by human brains, working together as a swarm.

As the animation above shows, a swarm 26 NFL fans has low confidence that Pittsburgh will win this Week 12 match-up.

The Steelers play at the Broncos at 4:25 p.m. Eastern Sunday on CBS.

More like this
Innovation
21 hours ago
Want to take a road trip in your electric vehicle? Prepare to go off track
By Molly Glick
Innovation
7 hours ago
Prolific Tesla beta-tester reveals what Full Self-Driving 10.13 needs to fix
By Andrew Moseman
Innovation
8.17.2022 6:15 PM
Can we terraform Mars? Scientists may have made a major breakthrough
By Jeff Nagle
Related Tags
Share: