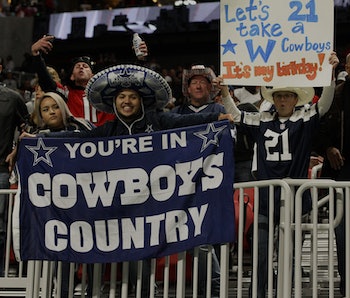 For the main course on Thanksgiving, the football gods have served up Redskins-Cowboys, a matchup that looked like a yawner a few weeks ago but now carries playoff implications in the “race” for first place in the NFC East. This is by far the most important game on Thanksgiving Day. If possible, try and move up turkey time or push it back into the evening, because this is the game to watch.

How the tables have turned. Two weeks ago, the football world left the Cowboys for dead. Eulogies were written. Calls for a complete teardown were made. Ad people were dancing on the Cowboys’ grave.

What a difference a fortnight can make (no, not that one). Since the demoralizing 28-14 loss to the Titans, Dallas has strung together consecutive wins over the Eagles and the Falcons, and has now climbed into second place in the NFC East, a mere game back from Washington.

There’s an old tale about two hunters in the woods who encounter an oncoming grizzly bear. One of them shouts, “We’ll never outrun the bear!!” The other shouts back, “I don’t have to outrun the bear – I just have to outrun you!!” The first hunter is the Washington Redskins, the second is the Dallas Cowboys, and the bear is the mediocre creature that is the NFC East. The third hunter is the Eagles, who won a prize for bagging a 12-point buck last season, but has since been eaten by the bear.

When these two teams first met a month ago, the Redskins narrowly edged the Cowboys, by the score of 20-17. Since then, Washington has lost two of its last three games and its starting quarterback, Alex Smith, to a horrific broken leg. By now, you’ve surely heard of the comparisons between Smith’s leg injury and Joe Theismann’s, 33 years ago. Things have gotten so desperate in Washington that the team will start Colt McCoy and recently pulled Mark Sanchez out of retirement. That should tell you all you need to know. Cowboys 24, Redskins 17, is my prediction, but how did a swarm of NFL experts working as a hive-mind predict the outcome of this Week 12 matchup?

To predict the result of this Week 12 match-up, Unanimous A.I. used what’s known as swarm intelligence. Some 33 NFL enthusiasts worked together as a hive mind to make their prediction. As you can see in the animation below, each participant controlled a golden magnet and used it to drag the puck toward the result they thought was the most likely outcome. This is where it gets interesting: As a user sees the puck move toward a particular decision, it triggers a psychological response. They might readjust their thinking as the group builds toward a consensus. It’s an artificial intelligence, produced by human brains, working together as a swarm.

As you can see in the animation above, a swarm of 33 NFL experts has chosen Dallas: Low Confidence when asked to predict the winner of this game. Interestingly, the puck was surrounded by magnets even as the swarm’s brainpower moved it into the final prediction, meaning this match may also be tough to call.

Washington plays at the Cowboys at 4:30 p.m. Eastern Thursday on Fox.

More like this
Mind and Body
7.27.2022 2:00 PM
Too hot to run outside? Sports scientists share 7 tips to break a sweat safely
By Ash Willmott, Justin Roberts, Oliver Gibson and The Conversation
Innovation
16 hours ago
This self-healing material could fix your dinged-up car in 30 minutes
By Molly Glick
Innovation
8.8.2022 10:00 AM
A wild new plane-train hybrid could whoosh you to your destination — if it can get off the ground
By Molly Glick
Related Tags
Share: