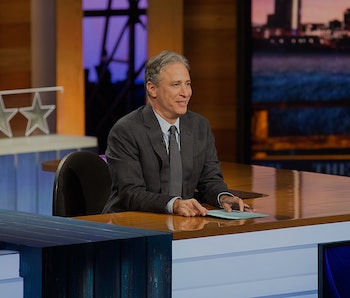 As we reach the home stretch of farewells for comedy stallion and all-around ubermensch Jon Stewart, the time has come to consider that we’re not only being deprived of a legendary late-night host, but also all the talent he had yet to shape.

Writing in the Harvard Business Review, Sydney Finkelstein, the associate dean of Dartmouth’s Tuck School of Business, argues that when Stewart signs off for good, we’re losing this generation’s most influential cultivator of comedy talent. Finkelstein also happens to be a professor of strategy and leadership and has a book coming out next year on so-called “superbosses,” so he has some expertise in this area.

Finklestein describes a superboss as someone whose passion for their work borders on obsession, inspiring their proteges to go beyond what they thought they were capable of and encouraging loyalty in the process. Here’s how he describes the Daily Show host:

Stewart embraced most of these tendencies. The work on The Daily Show was fast-paced, with deadlines to be met every day for the night’s show. Stewart expected new performers to step up to the challenge from their very first day. Correspondent Jessica Williams remembered being overwhelmed after receiving the “grand tour” on her first day, and “the next morning, Jon’s like, ‘Okay, so are you ready to be on tonight?’ And I was like, ‘Huh?’” Al Madrigal recalled The Daily Show as “a difficult gig. There’s nothing like it, and the only way to get good at it is to go out there and do it.”

With the exception of a heated exchange with Wyatt Cenac, Stewart engendered the emotional bonds Finklestein looks for as well. When Jezebel accused him of fostering a boy’s club, 30 of The Daily Show’s female staffers published on open letter describing their boss as “generous, humble, genuine, fair” and a thesaurus-worth of glowing terms.

Do we really care whether Stewart is a good boss? If we found out that he was prone to Bill O’Reilly-level bugfuck freakouts between promo tapings, would it mitigate the fun of his show? Yeah, I think so. Stewart’s fans are in mourning partly for the sense that, as he himself demonstrated through the show’s signature and eventually exhausting clip montages, most politicians and talking heads are completely full of shit, saying only what they think their audience wants to hear in the moment. Stewart’s schtick was best when he came off as an exasperated, reasonable man with a moral center, pushing against the 24-hour news cycle’s habit of turning stories that mattered into absurdist theater. Puncturing that image would puncture the act.

More like this
Gaming
Jan. 25, 2023
"Mindboggling" Launcher layoffs prompt outcry and tributes to WaPo gaming vertical
By Jess Reyes
Entertainment
19 hours ago
Onyx the Fortuitous and the Talisman of Souls is a cringe comedy as overlong as its title
By Andy Crump
Entertainment
Jan. 18, 2023
Everything you need to know about That ‘90s Show on Netflix
By Claire Fox
LEARN SOMETHING NEW EVERY DAY.
Related Tags
Share: