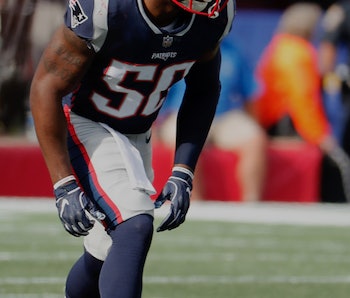 Oh God, it’s happening again. After being taken for dead, with a 1-2 start including losses to the lowly Jags and perennially mediocre Lions, the Patriots have once again sat up and reared their ugly heads, like a serial killer in a slasher film or Kane in a wrestling match.

The Patriots are now 7-2 and have won six in a row, including victories over the Chiefs, Bears, and Packers. To make matters worse, New England has finally found a pass rusher, with the emergence of The Quiet Storm.

That’s the problem with the Patriots’ system, which tramples the opposition like a Panzer: once a position players goes down with an injury, New England simply plugs in the next guy. Simple as swapping out the tread on a tank. And to make matters worse, standout running back Sony “Playstation” Michel (you heard it here first) may return this week.

Meanwhile, the Titans are 4-4 after a roller coaster season that has seen them lose their season opener before winning three in a row, then drop three in a row (including an L to the Bills – yikes), before knocking off Dallas on Monday Night Football last week. Maybe they’re on the upswing?

Unfortunately for the Titans, fresh off of Dancing With the Stars Dancing On the Star, lassoing this year’s woeful Cowboys is a far cry from bayoneting the Patriots. The swarm likes the Patriots over the Titans in this one. Sadly, we agree. Patriots 27, Titans 20 is my prediction, but how did a hive-mind of NFL experts come to their prediction for this Week 10 match-up?

To predict the result of this Week 10 match-up, Unanimous A.I. used what’s known as swarm intelligence to forecast the week’s slate. Thirty-three NFL enthusiasts worked together as a hive mind to make picks. As you can see in the animation below, each participant controlled a little golden magnet and used it to drag the puck toward the answer they thought was the most likely outcome. As the users saw the puck move toward a particular decision, it triggered a psychological response. They readjusted their decision-making, building toward the consensus you see below. It’s an artificial intelligence produced by human brains working together as a swarm.

As you can see in the animation above, the swarm of 33 NFL fans has high confidence in their prediction that the Patriots will win on Sunday.

The Patriots play at the Titans at 1 p.m. Eastern Sunday on CBS.