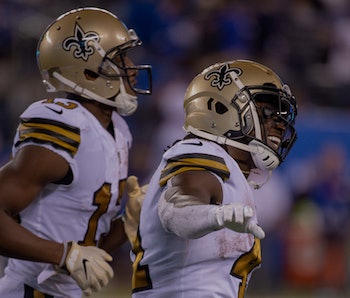 By knocking off previously undefeated Los Angeles last week, the Saints have taken the title belt from the LA Rams as the team to beat in the NFC, and just maybe The Best Team in Football. After inexplicably dropping the season opener to the Bucs, the Saints have now banged out seven consecutive Ws and barring injuries, look poised for a deep playoff run.

The good times just keep rolling for New Orleans, which added a potential Hall of Famer to the mix this week by signing the mercurial Dez Bryant. Dez gives the Saints another elite wide receiver to line up opposite Michael Thomas and even more reason to strike fear into the hearts of opposing secondaries everywhere.

Meanwhile, Cincinnati sits at 5-3, good for second place in the NFC North. After a 4-1 start, the Bengals went 2-2 in October, beating two bad teams in the Dolphins and Bucs and losing to two good ones in the Steelers and the Chiefs. Cincinnati is an okay-to-good team. New Orleans is a great one. Saints 31, Bengals 24 is my prediction, but how did a hive-mind of NFL experts predict the outcome of this Week 10 match-up?

To predict the result of this Week 10 match-up, Unanimous A.I. used what’s known as swarm intelligence to forecast the week’s slate. Some 33 NFL enthusiasts worked together as a hive mind to make picks. As you can see in the animation below, each participant controlled a little golden magnet and used it to drag the puck toward the answer they thought was the most likely outcome. As the users saw the puck move toward a particular decision, it triggered a psychological response. They readjusted their decision-making, building toward the consensus you see below. It’s an artificial intelligence produced by human brains working together as a swarm.

As you can see above, the swarm has chosen, with 79 percent collective brainpower, the option of “New Orleans (low confidence)” for the winner of Sunday’s game against in Cincinnati.

The Saints play at the Bengals at 1 p.m. Eastern Sunday on Fox.