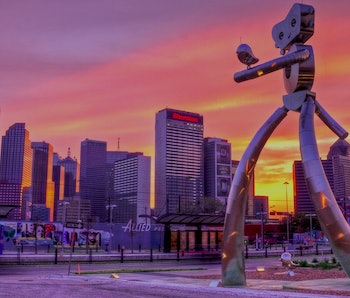 It’s a sad day for peripatetic droids: The amalgation of wires, a bucket, and dopey smiling face formerly known as HitchBot was dismembered by a Philadelphian, to the consternation of robot fans worldwide. HitchBot not only made it 3,600 miles across Canada by hitchhiking (that is, being politely picked up and then politely placed down), but also out of Boston in one piece, which is arguably the grander achievement. In the pantheon of bots, how does HB line up?

The Guinness World Record holder for walking robot is a Japanese biped that completed a jaunty 10-mile stroll over five days in September 2011.

In April, a Delphi driverless car cruised into New York City after a 15 day, 3,400-mile journey that began in San Francisco. Unlike HitchBot, who lived and died by the hands and feet of strangers, the autonomous Delphi car did 99 percent of the traveling. As Wired noted upon the completion of the journey, autonomous cars are becoming more sophisticated by leaps and bounds. Just over a decade ago, the car to make it the furthest on DARPA’s 2002 Grand Challenge was Carnegie Mellon University’s Humvee that got stuck at mile 7.

Liquid Robotics’ wave-powered glider, aptly named Wave Glider, took a year to complete a 9,000-mile watery swim from San Francisco (the starting point of every robot’s path to self-discovery) to Queensland, Australia. After HitchBot, which just sort of sat there if we’re being honest, Wave Glider is the next lowest-maintenance machine on the list, using solar energy to power its data-collecting systems — it keeps an electric eye on everything from water temperature to radioactivity — and the motion of the ocean as propulsion.

All you other machines, throw in your towels: Voyager 1, the deep space probe NASA launched in 1977, is 12.2 billion miles from Earth and counting. To us, the light in HitchBot’s eyes winked out for the last time Sunday morning. But to Voyager, news of the tragedy — were it to have been transmitted at the speed of light — would have taken another 18 hours to arrive. In space, no one can hear you scream or tell you about the demise of a GPS-tagged hunk of plastic, even if it never got to “See the house from Pixar’s Up” (in retrospect, your bucket list was sort of sad, HitchBot).

More like this
Science
Jan. 31, 2023
NASA Finds the Culprit Behind a Webb Telescope Malfunction: Powerful Cosmic Rays
By Doris Elín Urrutia
Science
Feb. 2, 2023
Exclusive: NASA Explains How the Voyager Missions Could Live Until 2035
By Kiona Smith
Science
Feb. 1, 2023
65 Years Ago, America Launched Its Most Pivotal Space Mission Ever
By Jon Kelvey
LEARN SOMETHING NEW EVERY DAY.
Related Tags
Share: