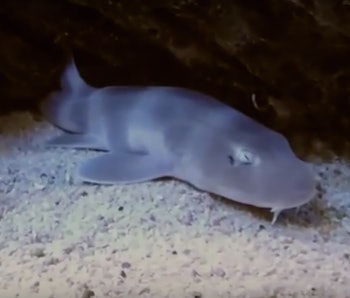 It’s tough being a shark. Your habitat is being wrecked; you’re trying to swim through an ocean thick with plastic; and, you’re being overfished to the point conservationists are fearful for your future. So the discovery of a “virgin shark birth” at San Francisco’s Steinhart Aquarium has many understandably excited about what this means for reproduction in the wild.

Redorbit reports a bamboo shark gave birth at the aquarium at least 45 months after it was last observed mating. It turns out the shark had stored sperm from that last mating session for years, the longest confirmed example of sperm storage on record for any shark species. There’s been speculation that sharks could reproduce under uniquely challenging conditions, but this is the first confirmation of how resilient their reproductive mechanism is. This is common in snakes and insects, but not something anyone expected to see in sharks.

A full video explaining the importance of Shark Jesus is out now. Like the man said, life, uh, finds a way.

More like this
Science
Oct. 4, 2022
Watch: Stunning visualizations reveal the Moon's violent birth
By Jennifer Walter
Science
Sep. 28, 2022
Artemis I: A fire at NASA Kennedy gives the long-delayed Moon mission its latest twist
By Doris Elín Urrutia
Science
14 hours ago
How the Moon formed and more: Understand the world through 8 images
By Robin Bea
Share: