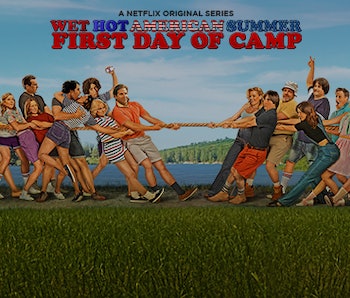 When a sequel to David Wain’s 2001 Wet Hot American Summer was confirmed in April in the form of a Netflix original miniseries, red flags appeared for many fans of the original film. For every hopeful and open-minded fan, there was a longtime Wain devotee who had become used to, over the past few years, approaching the writer/director’s new work with caution. The attempt to recreate former glory felt like a windmill battle waiting to happen.

Following the commercial success of 2008’s madcap Role Models, Wain’s work became decidedly more conventional in tone and structure; today he’s an experienced and polished filmmaker with more conservative tendencies. The meta-commentary, jokes-about-making-jokes, nonsensical motivations and anti-humor banalities that dominated his early career are further and far between in his recent work. In films like the recent Poehler/Rudd vehicle They Came Together and, to a lesser extent, the hippie-parodying Wanderlust, the goofs (as Ken Marino puts it in Wain’s outre classic The Ten) come off as weird diversions, interpolated into otherwise fairly traditional rom-coms. Sometimes the idiosyncrasy of this becomes part of the humor, but just as often, it seems a bit forced.

Would Wain and co-writer/star Michael Showalter, so many years into increasingly “serious” careers, be able to recapture the outright clowning of their post-The State years? A few episodes into the series, the answer reveals itself as a firm, if not resounding, “yes.” However, the old slapstick antics are mixed with a new meta-humor focus. Wain spends much of the series winking at the decadence of the project. After all, it’s an eight-part prequel (not sequel, even though the actors are 14 years older — see Showalter, especially) that takes place in one day (an episode is devoted to “Dinner”).

The director also pokes fun at reboot-franchise-style “fan service”; a huge portion of the series is spent explaining, in outlandish ways, the complex backstories that led to circumstances of the original movie. We see how Gene’s (Christopher Meloni) PTSD became unlocked, how Jon Benjamin became the voice of his can (he, as the human Mitch, was once the camp director), and Professor Newman’s (David Hyde Pierce) travails being “just an associate professor.” Many of these ideas are funny conceptually, but sometimes all of the action — as it did regularly in Netflix’ verbose Arrested Development reboot — can overwhelm or suffocate the actual moment-to-moment jokes in a way that it did not begin to in the 2001 film.

But once Wain gets past the lengthy expositional phase — which causes the first half of the series to drag a bit — the laughs come more regularly. There’s a greater feeling of spontaneity in the performances; it’s as if the cast members, many of whom are now high-profile comedians and dramatic actors, needed some time to loosen up. Rudd especially begins to inhabit his surly camp-bad-boy role more naturally, delivering lines that are as funny as anything in the original movie (“Babe, I was thinking of watching you ride a horse later, is that cool?”). Coop’s (Showalter) scenes with Donna (newcomer Lake Bell) become more and more funny, as she is moved in on increasingly by David Wain’s part-Israeli former soccer counselor and free spirit Yavon. The blend of improv and high-concept plot diversions — the dichotomy that propels Wain’s best work from Stella to his undersung web series Wainy Days — becomes more evenly mixed.

Ultimately, the reboot — clearly as a result of much time and effort on the part of Showalter and Wain, its writers — is successful, even though it feels like the work of an older man who has spent years honing his craft as a serious filmmaker and not cut-ups straight out of sketch comedy. There are definitely too many cameos and plot lines for everything to work, and the nature of the concept (a four-hour exploration of the Wet Hot universe) makes for some boring moments — the story of the upper-crust, sadistic snobs at Camp Tigerclaw across the lake, the incessant bullying of resident camp reject Kevin (teen actor David Bloom), and the extensive exploration of Molly Shannon’s relatively one-noted backstory. But overall, these are nitpicks. Wain and Showalter have surpassed all expectations in First Day of Camp and created a project that will satisfy both die-hard Wain fans and less invested comedy fans alike.