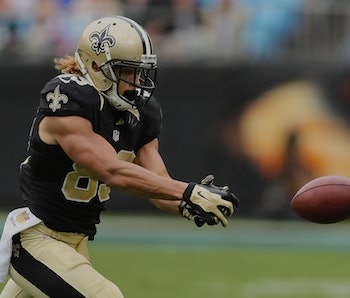 I wonder if last year’s NFC title game will come up, or whether NBC will show this highlight. Poor, poor Marcus Williams, who lowered his head in an attempt to gore Vikings receiver Stefon Diggs on the game’s final play, only to come up with nothing but air and become famous for all the wrong reasons. The internet then set to work doing what it does best: holding up the unfortunate as objects for our collective ridicule.

Prior to this season, both of these teams looked primed to return to the NFC Championship, and despite some early stumbles, a rematch looks like a distinct possibility (although of course, the undefeated Rams will almost certainly have something to say about that).

The Vikings replaced Case Keenum with Kirk Cousins in the offseason, a clear upgrade at the most important position. However, injuries have taken a toll, as the once-promising second-year running back Dalvin Cook continues to miss time due to a hamstring injury. Star defensive end Everson Griffen also missed time, but in rare bit of good news, he has rejoined the team — although it’s unclear whether he will play this week.

On the other sideline, the Saints now employ the passing-yardage GOAT and have marched to a 5-1 start and exalted status as One of the Four Actually Good Teams in the NFL (my term; go and get your own). Even so, the Saints needed a missed extra point from the NFL’s most accurate kicker of all time to squeak by the Ravens last week. The law of averages holds that the Saints’ luck is destined to balance out at some point. Why not this weekend? Vikings 31, Saints 27 is my prediction but how did an A.I.-powered “swarm” of NFL experts predict this one turning out?

To predict the result of this Week 8 match-up, Unanimous A.I. used what’s known as swarm intelligence to forecast the week’s slate. Some 25 NFL enthusiasts worked together as a hive mind to make picks. As you can see in the animation below, each participant controlled a little golden magnet and used it to drag the puck toward the answer they thought was the most likely outcome. As the users saw the puck move toward a particular decision, it triggered a psychological response. They readjusted their decision-making, building toward the consensus you see below. It’s an artificial intelligence produced by human brains working together as a swarm.

As you can see in the animation above, the swarm of 25 NFL experts worked together to create a hive-mind that chose the Saints to beat the Vikings on the road. The swarm also has low confidence that the Saints will beat the 1-point spread in this match-up.

The Saints play at the Vikings at 8:20 p.m. Eastern Sunday on NBC.