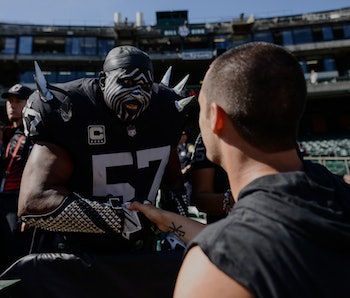 At one point during the fourth quarter of last week’s game between the Browns and the Raiders, it looked like Cleveland had put the game away. Carlos Hyde ran for a first down, leaving Oakland without any remaining timeouts. Then the refs got involved. A controversial replay call reversed the call on the field, ruling Hyde was short of the first down and forcing the Browns to punt. The Raiders then drove down the field and scored a touchdown and two-point conversion to send the game to overtime. The Browns then proceeded to choke in overtime, doing what they do best in snatching defeat from the jaws of victory.

The lesson, as always, is that God hates Cleveland and reserves His most petty Old Testament savagery for that post-industrial wasteland. Call it a deus ref machina for Oakland. A less-deserving entity hasn’t received a bailout this generous since AIG during the Great Recession.

Meanwhile, the Chargers allowed the 49ers to hang around all afternoon and nearly got upset last week, despite the fact that the Niners started backup quarterback C.J. Beatherd, due to Jimmy “GQ” Garroppolo’s season-ending knee injury in Week Three. Which brings us to this game. Hard to get too excited about this one; the Raiders are 1-3 and don’t seem like they deserve even their lone win. The Chargers have two wins over bad teams and two losses to good ones. However, they appear ready for a raucous, hostile crowd inside their own stadium, having prepared for an invasion of silver and black by piping crowd noise into their practices in anticipation of a “home” game in their own stadium. Such are the perils of abandoning your traditional home and fan base to become LA’s second-favorite football team (third, if you count USC). All of this adds up to a sizable pile of “meh.

The AI Swarm likes the Chargers over the Raiders. Why not? A hive mind is better than one. Chargers 30, Raidaz 24. (This pick has nothing to do with the Raiders robbing me of my Browns pick last week.)

The Raiders play at the Chargers at 4:05 p.m. Eastern Sunday on CBS.

More like this
Innovation
17 hours ago
Horrifying: Robots may have just gained a creepy new skill
By Molly Glick
Innovation
7 hours ago
Scientists have created a mechanical womb that can grow life in the lab
By Miriam Fauzia
Innovation
Sep. 28, 2022
Look: This tiny robot could change medicine forever
By Katie MacBride
Related Tags
Share: