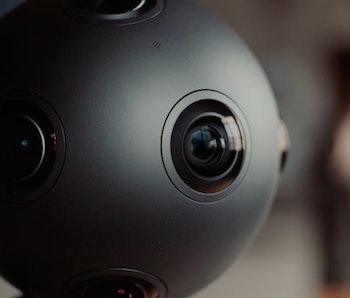 The technology for displaying virtual reality is here, but the technology for filming it remains expensive and unwieldy. There’s a simple reason for this: To recreate a scene from a real-life situation and turn it into a 3D, immersive environment, you need to film it in 360 degrees. And right now, the best thing most people have is a bunch of cameras taped together in a circle.

Here comes Nokia out of nowhere, shedding their brick phone history and revealing the Ozo, a next-gem camera for recording video in 360 degrees. This thing matters, but not because you’re going to buy it. You’re not.

Let’s be clear: Ozo will not be a consumer camera. It’s a high-end device made for professional filmmakers, the media, advertisers, and everyone else with buckets of money to throw around. There’s no price set yet, but it’s expected to go for something in the five-figure range.

Plenty of other companies have announced plans to to build similar, spherical cameras capable of capturing 360 degree footage more effectively, but none of them has really come close to Ozo. GoPro plans to release a spherical mount later, but again, it’s just a bunch of smaller cameras cobbled together; and the same goes for its overhyped 16-camera quadcopter built for Google Jump. Samsung is working on something too, but who knows when that will be ready.

This is what the beginning of the race to make a consumer VR filming solution looks like. It looks chaotic and it looks expensive.

That said, Nokia has jumped into the VR filming race at the right time, and, for the moment, it’s theirs to win. Although their camera is basically limited to professionals, the rest of us will still get to enjoy the kinds of worlds people capture and simulate using Ozo. That’s powerful PR. The question is what will they use that momentum to sell us.

Just be careful before you get too excited — VR devices might take some getting used to before you dive in headfirst. With how real Ozo videos are expected to look, you might want to wait till the technology gets better, before cybersickness gets you first.

More like this
Innovation
6.27.2022 8:00 PM
Artificial photosynthesis can grow plants without light — and may solve a planetary dilemma
By Steph Lee
Gaming
6.15.2022 6:30 PM
Halo Infinite's Juneteenth "Bonobo" skin is a shocking failure by Microsoft
By Hayes Madsen
Culture
6.28.2022 9:00 AM
8 sensational sci-fi shows and movies coming to HBO Max in July 2022
By Robin Bea
Share: