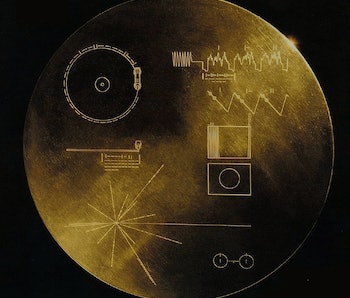 Way back in 1977, NASA launched the Voyager spacecraft to go where no man has gone before — our outer solar system. The middle-aged probe is still out there, trekking through the far reaches of interstellar space and sending back whatever data it can.

But what non-Boomers might not know is that NASA sent the little dude off with something called the “Golden Record.” It’s an actual phonograph recording (or rather, set of multiple records) that plays back a patchwork sampling of sounds from Earth. The idea is that if there’s intelligent life somewhere else in the universe and they manage not to keep from running over poor little Voyager, they will be able to listen to the Golden Record and get an auditory glimpse at what life is like on the pale blue dot.

NASA has finally made the Golden Record available for public enjoyment. You can check it out on the agency’s Soundcloud account. It’s the latest in a slew of soundbites NASA has posted that illustrate more than a half-century’s worth of recordings, be it the explosive static from rocket launches, to the sounds of the solar system, to snippets of communications between Houston and space crews during various missions.

“The spacecraft will be encountered and the record played only if there are advanced space-faring civilizations in interstellar space,” Carl Sagan said when Voyager was launched. “But the launching of this ‘bottle’ into the cosmic ‘ocean’ says something very hopeful about life on this planet.”

There are two main playlists of sounds to listen to. The first are recordings of assorted greetings from different languages. The second is a plethora of random sounds of life, ranging from a mother and child sharing a kiss, to dogs barking and crickets chirping, to even morse code beeps and boops.

It’s amazing stuff, but the Golden Record certainly isn’t the only audible messages we’re hoping aliens might stumble upon. In 1974, the Arecibo Observatory in Puerto Rico sent the first-ever message into space intended for extraterrestrial life. It was a single message containing 1679 “bits” of information that, when laid on a 23-by-73 grid, show a series of simple pictures. It will reach the globular cluster M13 in the year 26,974.

Some 25 years later, the artist Joe Davis transmitted the genetic code for the plant enzyme RuBisCo — essential for photosynthesis and one of the most abundant proteins on the planet.

Billionaire Yuri Milner and renowned physicist Stephen Hawking also just launched the $100 million, 10-year Breakthrough Listen Initiative, which will look to use two of the world’s most powerful radio telescopes, to survey 10 times more of the universe for alien life than has ever been done before. But the announcement also included launch of the Breakthrough Message competition, where entrants will compete for $1 million to design messages “representing humanity and planet Earth.”

There aren’t immediate plans to broadcast those messages into space, but we can’t imagine things will stay that way. For $1 million dollars, you better believe those messages are going to be some intricate, beautiful works of art.

More like this
Science
19 hours ago
Physicists demo a sci-fi-inspired laser that mimics a classic UFO trick
By Evan Gough and Universe Today
Science
4 hours ago
This nuclear-powered X-ray “flashlight” may help scientists probe the Moon for water
By Andy Tomaswick and Universe Today
Science
Jan. 26, 2023
JWST captures Chariklo’s rings and more: Understand the world through 8 images
By Robin Bea
LEARN SOMETHING NEW EVERY DAY.
Related Tags
Share: