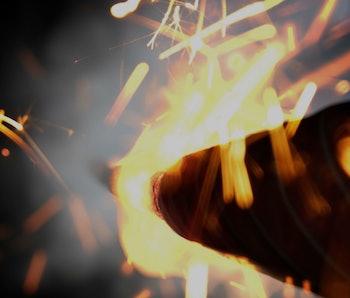 Mission: Impossible - Rogue Nation thrums into theaters on Friday, with quinquagenarian Tom Cruise again taking up the mantle of Ethan Hunt, executing bad guys and actuary-defying stunts with equal gusto. Like the other great movie spies, your Bonds and your Bournes, Hunt didn’t get famous on the silver screen. Where the other two had literary origins, the IMF agent got big on television. Still, Mission Impossible owes a great deal to the printed page and, more specifically, an obscure, long since discontinued conjurers trade magazine: Woodfield’s Magicana.

William Woodfield would eventually work as a producer on the TV series that introduced the IMF to the world, but in 1946, he was an 18-year-old amateur illusionist armed with a newsletter, Woodfield’s Magicana: A Trade Paper for Magicians. The subject matter reads today like a video game site’s nav bar. There were tips, tricks (the illusion kind), reviews, news, and rankings of famous mages. Here’s a taste of Woodfield describing a trick he subsequently breaks down for would be practitioners of the magic arts.

Here is the effect in a nutshell: The magicians digs into his coat pocket and winds up with a folder of matches. He shows it to the audience and positions it flat on his left palm. Slapping the left with the left palm with his right one containing a full deck of playing cards, in case, to take the place of the matchbox. There are no gimmick phone moves or difficult sleights. The trick is typical of [Joe] Tershay’s magic… elegant, to the point, amazing, and yet simple to do.

The trick is, in a sense, not a trick at all. What’s required is an understanding of how to position the items to get them to snap into place. The magic here — and this speaks to what Mission Impossible has become — is actually just extreme competence. That said, Woodfield was not above more elaborate ruses, including ones requiring removable masks.

The magazine Genii snapped up Magicana, with a 16-issue run that lasted until April 1949. Woodfield would leave the realm of magic publishing for the other magical realm of screenwriting, but he never forgot his first love: sleight of hand.

It was around this time Desilu Production, owned by Lucille Ball and Desi Arnaz, went into production on Mission Impossible, the spy show they’d agreed to make with Bruce Geller, the writer of several episodes of Have Gun - Will Travel. The show was about Rollin Hand, a spy played by Martin Landau, and his many adventures. It was not particularly original.

In fact, Mission Impossible didn’t immediately garner much interest. The first five episodes were competently made, but hardly groundbreaking. Then Geller called in Woodfield to help with episode six, “Odds on Evil,” and everything changed. The show was suddenly about rigging games of chance and playing baccarat in fictional countries. There wasn’t magic, but there was sleight of hand and there was that specific sort of magical thinking that requires expertise and planning. Woodfield’s Magicana was being used as a sort of field manual by IMF agents, who soon were switching out masks and pickpocketing their enemies on the regular.

“How the hell did he do that?” became the core premise of the show, which ran until 1973, years after Geller gave Woodfield, who went on to write episode of Shaft and Columbo, the axe.

The modern film incarnation of the beloved TV franchise is deeply informed by Woodfield’s work, but also somewhat immune to it. The modern IMF we’ll see in Mission Impossible - Rogue Nation is far more interested in technology than in magic. But watch Simon Pegg’s character Benji Dunn. The character may seem like the international IT guy of mystery, but is performed with an eye towards playing the conjurer. Pegg is a big enough nerd to know the history.

But the major way in which the franchise had stayed true to Woodfield’s vision has everything to do with stunt work. Cruise does a lot of the work himself and that fact, which the audience is supposed to know, inspires awe. In Rogue Nation we see Ethan Hunt clinging to a plane and think: “Wow, Cruise did that.” That’s what a sleight of hand artist wants, the sense that something happened coupled with the disbelief that it could be done. Mission Impossible isn’t about magic, it’s about pulling off elaborate tricks; in other words, the show is about what it’s like to be a magician, not a magician’s audience.