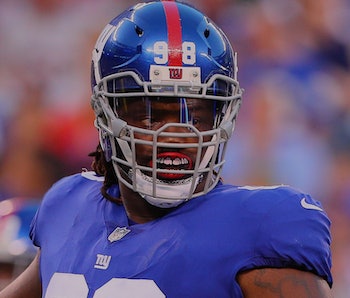 The Giants really should be better than this. Then again, after a 3-13 season last year, maybe not.

The Giants have the fourth-worst rushing defense in the NFL, having conceded more than 500 yards on the ground thus far this season. Meanwhile, the Panthers have the League’s seventh-best rushing offense. Giants linebacker Olivier Vernon and defensive tackle Damon “Snacks” Harrison (a favorite of mine, for obvious reasons) are listed as Questionable for this game. Even if one or both play(s) against Carolina, all signs point towards the Giants struggling to decaffeinate the versatile Christian “Wild Caff” McCaffrey and the rest of the Panthers’ rushing attack.

The Giants have already slipped to 1-3, have sunk back to the bottom of the NFC East, and risk falling into total irrelevance with another loss. By contrast, the Panthers are 2-1 and need a win to keep pace with the white-hot Saints in the NFC South. Star Giants receiver Odell Beckham, Jr. has racked up the yards this season, but has yet to find the end zone. He seems due for a big game, but will that tip the scales in New York’s favor? Magic 8 Ball says… probably not. The beatings will continue until morale improves. Panthers 27, Giants 20.

As you can see the Panthers are not only favored to win, but the swarm has low confidence that Carolina will also beat the Vegas spread of 7 points.