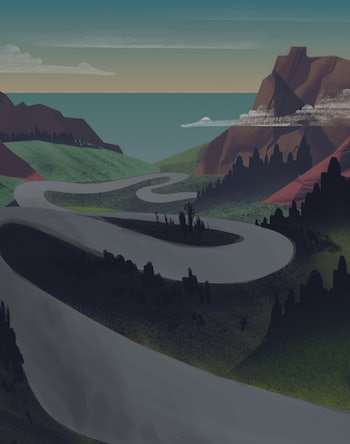 Scott Mansell, professional driver and the founder of Driver61, spoke with Inverse to detail his top tips that he would relay to anyone on the road looking to get the most out of their driving experience.

Hydroplaning, also known as aquaplaning, should be avoided at all costs. This is where the wheels lose contact with the road because there’s too much water, effectively skimming over the surface. The driver, unable to control the car by steering the wheels against the road, loses control. It occurs mostly with larger bodies of collected still water and poses particular problems at high speed.

“Because the treads of the grooves get full of water, and they actually can’t take in any more water, it lifts the tire off the road, so you have absolutely zero control as you’re driving along,” Mansell says.

The phenomenon is a serious issue. Over 37,000 people die in traffic accidents in the United States each year, and one in four deaths come from weather-related issues. A further 445,000 people are injured in weather issues. Around 73 percent of deaths and injuries relating to tough weather happened while the roads were wet.

“The best thing is to move away from the big areas of standing water,” Mansell says. “Also to reduce your speed because the slower you go, in effect, the less water that’s coming into the tire.”

Temperature changes can alter the surface of a road. While a wet road can lead to aquaplaning, a hotter or cooler road can also alter feelings of handling and speed. It’s important to take these factors into account, particularly for racing drivers.

“For example, if you’re practicing, and you go out in the morning, and then an hour and a half later you get back out on the circuit. You’ll feel the difference, there’ll be a temperature change, the circuit conditions will be different, in terms of, as we say, how clean the track is or how green the track is,” Mansell says. “Over a race weekend, the circuit will get faster and faster because there’s more rubber on the circuit, and it becomes stickier.”

The suspension of a car can dictate the feel of a ride and its suitability to certain roads. Mansell notes, for example, that the Mercedes-Benz C-Class is designed for comfort on bumpy roads. It’s a decision that manufacturers make in the design process, which is why it’s key to understand this process.

“They pick a point, and it’s kind of a scale of how well you want it to handle vs. how comfortable you want it to be, in very simplistic terms,” Mansell says.

Mansell notes that some manufacturers now include air bladders for adjusting the suspension through the in-car settings. For the most part, however, Mansell recommends the average driver trusts the manufacturer.

“The manufacturers do a great job in creating cars that have grip but also comfort, and it’s getting better with the way that suspension technology is moving forward,” Mansell says.

Sport Mode Will Boost Your Moves

Your car may come with a Sport mode included. While its operation varies between manufacturers, a flick of the switch can produce a more responsive ride for those times when you need maximum performance.

“They’ll have different throttle mass, so the throttle response will be harder, harsher, and more responsive,” Mansell says. “Suspension will change, too. The steering ratios will probably turn up a little bit, so it means that the steering will have more direct feeling. If it’s an automatic or semi-automatic, they’ll speed up the gear shift speed as well.”

Eco Mode Can Save You

Other vehicles may offer an Eco mode. While this is key for fuel consumption, it takes on greater prominence with electric and plug-in hybrid vehicles where range is key. Activating this mode and understanding its effects can avoid an embarrassing empty battery.

“‘They’ll make the throttle response softer in Eco mode to try and dial out the typical drivers’ inaccuracy in their throttle movements,” Mansell says. “If the driver’s jabbing at the accelerator pedal, that’s really bad for fuel consumption. And so in Eco mode, for example, it will digitally take out these harsh movements in the accelerator pedal to try and save fuel.”

The same practices that save power in an electric car can also improve your fuel efficiency. Electric vehicle owners know that it’s better to let the car slow by itself, adding power through regenerative braking, than using the brake pedal. The same concept applies to fuel-based cars, where too much pedal can ruin fuel economy.

“If you’re accelerating and breaking, every time that you break, there’s a loss of energy,” Mansell says. “It takes much more energy to accelerate quickly than it does to accelerate smoothly and calmly up to a speed.”

The best practice is to watch the road, anticipate other drivers’ movements, and act accordingly.

“Think about driving on the motorway. You’re not looking very far ahead; you’re only just looking at the the boot of the car in front of you. When that car decelerates, you’re going to have to decelerate and then waste energy accelerating back up to 70 miles an hour,” Mansell says.

“Every time you do that, you’re wasting fuel or battery energy. Give yourself a bit more space and look a little bit further ahead so you can anticipate the ebbs and flows of the traffic. That way you won’t need to break as much.”

“Generally the manufacturers, if it’s a road car, they’ll give the front more of the distribution,” Mansell says. “So if the driver does accelerate hard, the front of the car will slide first, which is much more safe and much more easier to control.”

Pre-empting these situations while moving around a corner will help you judge your maneuver accordingly.