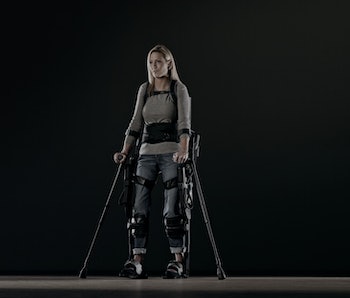 Last week, we spotlighted Panasonic’s new Power Loader exoskeleton, which helps users carry an additional 33 pounds on top of whatever their muscles can lift. Starting in September, companies can rent it out for about $5,700 (individuals likely can for $6000, an ungodly insurance premium, and a very good explanation). But the Power Loader isn’t unique, there are quite a few other exoskeleton suits already on the market or just arriving. A better you won’t be cheap, but it will definitely be stronger than the current you.

Yes, it’s insane that a company named themselves Cyberdyne, and then created a machine named HAL, but this company is apparently staffed by either ignoramuses or film buffs with a weird sensibility. Regardless, Cyberdyne’s HAL exoskeletons (short for Hybrid Assistive Lmb) are designed to help the elderly and physically disabled individuals walk and move around. In 2012, the company released the HAL 5 — its first full-body exoskeleton that attaches to the arms, legs, and torso. The 22-pound hardware can help users walk at nearly 2.5 miles per hour, and was also used by relief workers helping to clean up the aftermath of the Fukushima nuclear plant meltdown. It’s still in the testing stage, but qualifying patients can purchase it in Japanese hospitals for $20,000.

Israeli company ReWalk Robotics specializes in developing exoskeletons that help paraplegics walk again. Their latest pair of robotic legs is the ReWalk Personal 6.0. The new version offers improved comfort for users by using accelerometers to measure shifts in weight, which then adjusts the shoes to the user’s steps and movements and creates a smoother walking gait. Check out this video of a paraplegic man strolling down the streets of Manhattan using the new device.

Lockheed Martin’s foray into exoskeletons is designed for one thing: giving individuals more power. And it does so without being powered itself. The FORTIS exoskeleton is designed to allow individuals to use heavy tools without experiencing muscle fatigue, giving workers more strength and endurance while completing tasks. It simply adapts the worker’s height and weight and helps shift loads accordingly, making tools and objects feel weightless. The U.S. military recently worked out a contract with the company for testing FORTIS exoskeletons, so while the public can’t yet buy these babies up, those in the armed forces might have the chance to try them out.

Ekso Bionics is another company looking to harness exoskeletons for medical purposes. Its GT robotic skeleton is meant to help those with lower extremity weaknesses walk again. The newest version of the suit has four different settings that offer varying degrees of motion, depending on where the user is in his/her own rehabilitation. The idea is to wean off the more automatic-motion modes as patients get better on their own two feet.

Raytheon’s XOS 2 exoskeleton is catered totally to military needs. It’s the closest thing the world has to an Iron Man suit right now, as it can reportedly help users lift over 200 pounds without tiring, or 150 pounds on their backs without feeling a thing. And it does all this while letting users stay agile enough to walk up stairs, do pushups, and everything else soldiers do. Alas, it’s another piece equipment only the military can purchase — for now.

More like this
Entertainment
6.21.2022 9:39 PM
Marvel movie leak reveals a plan to change Avengers: Endgame’s ending
By Jake Kleinman
Entertainment
6.29.2022 10:30 AM
25 years ago, Nic Cage made his most explosive sci-fi movie ever — it was almost even better
By Jake Kleinman
Culture
6.17.2022 11:31 AM
45 years ago, the worst Exorcist sequel almost killed the franchise forever
By Jon O'Brien
Share: