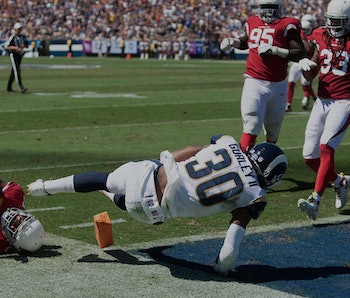 So how good are the LA Rams? Picked by many to be Super Bowl favorites in the NFC, this week will be the first true test of the team’s potential. The Rams boast a 2-0 record, but with wins over the hapless Raiders and the hopeless Cardinals, there’s no real reason to brag about their league-leading 6.5 points allowed per game.

The Chargers are coming in with a 1-1 record but getting beat in Week 1 by a Kansas City Chiefs assault is nothing to feel bad about. True, the Chargers gave up 20 points to the Buffalo Bills but it was garbage time points (such garbage that Bills CB Vontae Davis QUIT AT HALFTIME. IN THE MIDDLE OF THE GAME HE PUT ON STREET CLOTHES AND WALKED OUT. Well done, Buffalo).

To predict the result of this Week 3 match-up, Unanimous A.I. used what’s known as swarm intelligence to forecast the week’s slate. Thirty-three NFL enthusiasts worked together as a hive mind to make picks. As you can see in the animation below, each participant controlled a little golden magnet and used it to drag the puck toward the answer they thought was the most likely outcome. As the users saw the puck move toward a particular decision, it triggered a psychological response. They readjusted their decision-making, building toward the consensus you see below.

Despite the positive signs the Chargers have shown, the swarm feels pretty good that the Rams will win and even cover the -7 they are giving Philip Rivers and company. There’s no doubt the Rams are the better team on paper and their defense should give the Chargers trouble all day.

The Chargers play the Rams at 4:05 p.m. Eastern Sunday on CBS.

More like this
Innovation
21 hours ago
Worm spit could be a secret cure to the world's plastic problem
By Molly Glick
Innovation
Oct. 2, 2022
Want a better relationship with your dog? Neuroscientists say these 7 factors are key
By Tara Yarlagadda
Innovation
Sep. 29, 2022
Scientists have created a mechanical womb that can grow life in the lab
By Miriam Fauzia
Related Tags
Share: