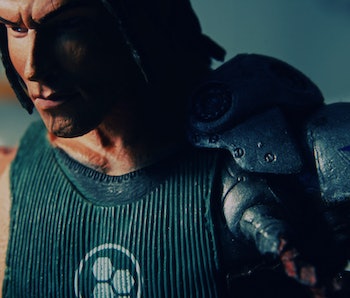 Darth Vader had bionic legs. Neo had implants installed in his neck and back. The Six Million Dollar Man had some work done. While in books and film sci-fi has come a long way in developing bionic body parts — that is, those enhanced by electrochemical means — we haven’t done such a bad job, either.

The cochlear implant is arguably the first bit of electronic technology we ever implanted into the human bodies. Invented by Graham Carrick from Melbourne, it’s given over 200,000 people worldwide the ability to hear.

The unfortunately named TAH-t, short for “temporary Total Artificial Heart,” can completely replace a diseased heart and get your blood pressure back to normal. While it isn’t meant to be a permanent replacement, it’s meant to keep people with heart failure going until they can receive an actual transplant.

Prosthetic arms have been around since ancient Greece, but a fully mechanized one — controlled entirely by the mind — wasn’t developed until relatively recently. Retired electrician Jesse Sullivan, who lost both of his arms in a workplace accident, was the recipient of the world’s first brain-controlled bionic arms, installed through nerve transfer surgery and managed by a computer embedded in his forearm.

Scientists have been messing around with brain electrical stimulation since the 1930s (and not always ethically). However, actually embedding electrodes in the brain — in a process called deep brain stimulation — didn’t start happening until 2007, when the first DBS system was approved to treat movement disorders. Now, such systems send low-grade electrical pulses through these electrodes to treat illnesses from Parkinson’s to essential tremor symptoms.

In a nod to Geordi La Forge, this year saw the development of the very first bionic eye implant. These retinal implants restored basic sight to people with dry age-related macular degeneration — the most common cause of blindness in the developed world. The implants work by converting video from a camera mounted on the patient’s glasses into an array of electrical pulses, which stimulate the retina to send visual information to the brain.

In the bionic world, the possibilities are endless. NASA, for one, has been trying to come up with a fully bionic suit to physically support its astronauts in space. Scientists haven’t covered all the organs yet — the stomach, liver, and intestines are, for now, too complicated to mechanize. But — if you’re in the market for a bionic vibrating penis, someone’s already got you covered.

More like this
Culture
8.7.2022 12:00 PM
Nichelle Nichols’ legacy was so much bigger than her Star Trek kiss
By Matthew Delmont and The Conversation
Innovation
8.9.2022 2:00 PM
A small robot on the ISS will practice performing surgery in space
By Doris Elín Urrutia
Science
8.7.2022 11:00 PM
Russia leaving the ISS could put the station’s future in jeopardy
By Wendy Whitman Cobb and The Conversation
Related Tags
Share: