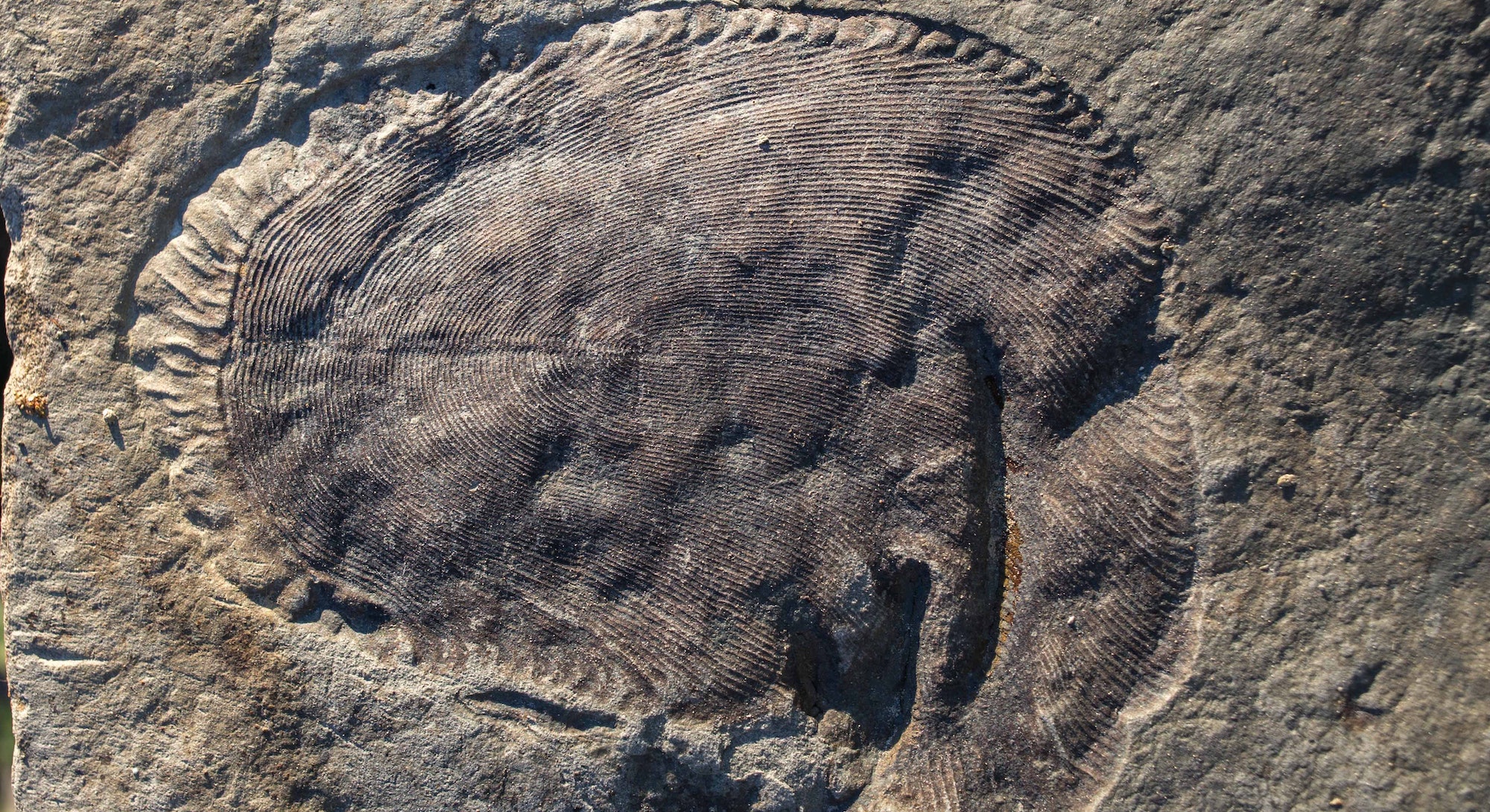 Before the Cambrian explosion created the vast majority of Earth’s first animals 540 million years ago, the world was a relatively quiet place. But that doesn’t mean it was lifeless. Before the Cambrian period, there lived a smattering of weird creatures referred to as the Ediacarian biota. Oldest among these bizarre organisms was a floppy 1.5-meter-long bathmat of a creature known as Dickinsonia. In a new Science paper, researchers confirm that this soft, weird little guy is the earliest known animal humans have ever discovered.

Dickinsonia, named for South Australia’s former director of mines Sir Ben Dickinson, doesn’t look like any animal we know today. It’s flat and oval shaped and can range in size from a few inches to several feet in diameter. It’s striped with long raised ridges known as modules. It doesn’t have a mouth, gut, or anus. But we know it ate microbes and algae, flopped around in the ocean, and was a multicellular organism well before any of the iconic Cambrian life forms — trilobites, mollusks, and their tiny ilk — came into being.

Now, Australian National University scientists have confirmed using one particularly well-preserved fossil just how long ago Dickinsonia bobbed along in the ancient oceans — and man, is it old.

Most animal life on Earth evolved during the Cambrian explosion, which began 540 million years ago. Before that, there existed the animal we know as Dickinsonia.

In 2017, researchers confirmed that Dickinsonia, despite its otherworldly looks, is indeed a member of the biological kingdom of Animalia, a classification reserved for multicellular eukaryotic organisms, like us. That discovery was groundbreaking because it meant that full-fledged animals existed before the Cambrian explosion — an idea scientists have been debating for close to a century.

Now, the ANU scientists show how long before the Cambrian explosion Dickinsonia lived using an unprecedentedly well-kept specimen. Digging in the sandstone of an extremely remote region near Russia’s White Sea, Ilya Bobrovskiy, a Ph.D. scholar at ANU, discovered a Dickinsonia fossil that was so well preserved that it still had traces of cholesterol — the fatty stuff that blocks human blood vessels — which the researchers used to date its origins. Cholesterol, the team explains in the paper, is a hallmark of animal life.

“Scientists have been fighting for more than 75 years over what Dickinsonia and other bizarre fossils of the Edicaran Biota were: giant single-celled amoeba, lichen, failed experiments of evolution or the earliest animals on Earth,” said Jochen Brocks, Ph.D., an associate researcher at the ANU Research School of Earth Sciences. “The fossil fat now confirms Dickinsonia as the oldest known animal fossil, solving a decades-old mystery that has been the Holy Grail of palaeontology.”

Impeccably preserved organic matter, which contained cholesterol — a hallmark of animal life — was lifted from the Dickinsonia fossil.

“The fossil fat now confirms Dickinsonia as the oldest known animal fossil, solving a decades-old mystery that has been the Holy Grail of palaeontology.”

ANU’s calculations state that Dickinsonia lived 558 million years ago, some 16 million years before the Cambrian explosion is thought to have begun. This will no doubt help shape scientists’ thinking about the Ediacaran biota, which, because individual species were so difficult to classify, had left scientists scratching their heads for many years.

As the team writes in the paper, their conclusion about Dickinsonia’s age “supports the idea that the Ediacaran biota may have been a precursor to the explosion of animal forms later observed in the Cambrian, about 500 million years ago.”

What this means is that, although Dickinsonia doesn’t exist today, it is the earliest known part of the evolutionary family tree from which all animals — our unbathmat-like selves included — eventually emerged.