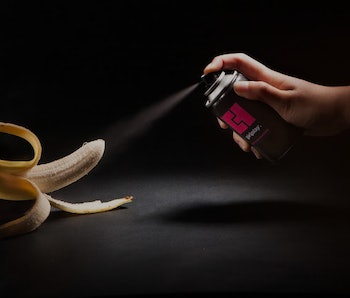 A New York art students sees a world of safe sex where we spray condoms on our penises like Banksy leaving a tag.

Michele Chu, of Utica’s Pratt’s Munson-Williams-Proctor Arts Institute, has designed a spray-on prophylactic that functions like the spray-on bandages. She’s yet to respond to interview requests, but on her project’s online profile she boasts that these will allow the perfect fit and also feel more natural.

If she’s designed a workable model, that’s great, because a spray-on condom is something people have been trying to crack for some time. In 2008, German sexual health researcher Jan Vinzenz Krause designed a model he believed would help curb STD’s by making safe sex feel better. However the product failed when consumers didn’t want to wait two-to-three minutes for the condom to dry, and the can’s hissing sound was a mood killer.

“These spray-on condoms are made for the perfect fit, and function like spray-on bandages in the marketplace today,” Chu wrote in the project’s profile on Packaging Of The World, a packaging design blog. (Chu has not yet returned Mic’s request for comment.)

All of this sounds silly, but everyone’s looking for that next leap in condom tech. There was a glow-in-the-dark-STI-detection prototype making the rounds a few weeks back. Durex launched a super-thin non-latex model, which boosted sales this year. Even Bill Gates is famously investing millions in a better rubber. There’s stupider things people can put their money in than keeping people safe.