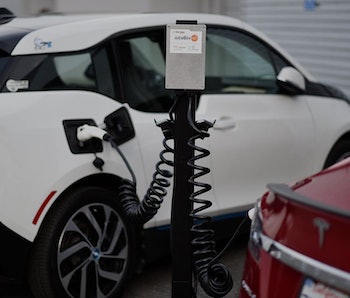 Last month, Tesla managed to hit another milestone. Eric Loveday from InsideEVs reports, “It’s hard to believe it, but indeed it’s true. In the month of August, the Tesla Model 3 alone out-sold all passenger cars from BMW.” Meanwhile, in Germany, legacy automakers are struggling to develop a cohesive strategy for their fledgling electric vehicle programs. As automotive bigwigs argue about how to proceed, small German start-ups are trying to push the electric vehicle movement forward.

Looking at the industry leader, Tesla has developed a highly aggressive and sophisticated worldwide charging infrastructure for its own vehicles. As German automakers trot out new electric cars, the question remains: where is their charging network? Unlike Tesla, individual German automakers have turned their backs on a vertically integrated approach to EV charging infrastructure build-out.

Sensing an opportunity, young entrepreneurial start-ups in Germany are looking to fill the charging void. The Financial Times reports that small companies are leading the effort in places like, “Berlin where start-up Ubitricity is developing MobileCharging and slow-charging EV points that can be incorporated in the urban infrastructure, into lamp posts for example. Elsewhere, a joint venture created by BMW, Daimler, Ford, and Volkswagen Group, called IONITY is developing 400 fast-charging stations across Europe.”

Ubitricity is comparing “the evolution of electric vehicles with emerging markets, where land-line telephones have been leapfrogged by mobile phones,” according to founder Knut Hechtfischer. And IONITY claims that “slow charging is a thing of the past. This new generation only needs 15 minutes for a charge… the time it takes to relax and have a cappuccino,” says company CEO Michael Hajesch.

According to the Financial Times, “Germany’s old automotive business model, which lasted for well over a century, of selling combustion-engine cars to private customers, is drawing to a close…. A ground-breaking German court ruling in February stated that cities can ban the most polluting diesels from city centers proving that the only way for electric vehicles is forward.”

Furthermore, the country is setting an ambitious goal, “to put six million electrically powered vehicles on German roads by 2030… [and] over the last year, the share of diesel vehicles in German new car sales has dropped sharply, from about half to 35%. Plug-in electric car sales more than doubled in 2017, with the momentum continuing this year, Germany’s Federal Motor Transport Authority reported.”

In addition, “German motorist[s] can get 4,000 euros of subsidies for purely battery electric vehicles, and 3,000 euros for a plug-in hybrid. German purchasers of fully electric vehicles registered between 2011 and 2020 also benefit from a 10-year exemption from ownership tax. The Electric Mobility Act… [also includes] priority parking spaces near charging stations, free or reduced-price parking, and exemptions from some access restrictions.”

Kudos to Germany’s government for policies supporting EVs — especially in light of the dieselgate scandal that rocked the local automotive industry. It is, however, disappointing to see Germany’s government asking Tesla Model S owners to pay back €4,000 in EV incentives. In any event, small investments in German start-ups like IONITY and Ubitricity are encouraging. But it remains to be seen if it’s enough to catch up with Tesla.