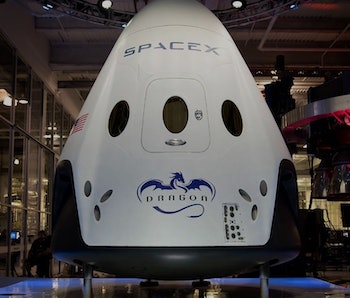 SpaceX’s Dragon capsule has been on a trip. On Monday, CEO Elon Musk shared a video on his personal Twitter page of the craft departing from the International Space Station last month, as part of the numerous back-and-forth trips that keep scientists supplied to keep experiments running.

The video shows the capsule gradually gliding away with an incredible view to the earth, as it slowly begins its journey back to terra firma. This mission saw the Dragon lift off from Florida’s Cape Canaveral Air Force Station at 5:42 a.m. Eastern time on June 29, packed with 5,946 pounds of cargo set for use in 27 scientific experiments that arrived on July 2. Among the supplies, SpaceX’s capsule sent up an iPad Air, some Death Wish Coffee, fresh crab meat, and an A.I. robotic assistant powered by IBM Watson called Crew Interactive Mobile Companion, or CIMON for short. Thankfully, unlike the HAL assistant in the film 2001: A Space Odyssey, CIMON won’t be left in charge of opening the pod bay doors.

For its return mission that started August 3, the capsule was packed with 3,800 pounds worth of supplies. The Dragon landed in the Pacific Ocean southwest of Los Angeles two days later, and SpaceX shared an impressive picture of the capsule hoisted out of the sea. The return missions burn the trunk contents, so for this trip the scientists destroyed a Naval Research Laboratory that had studied the earth’s atmosphere.

The capsules play a big role in SpaceX’s reuse ambitions, which also involves saving the Falcon 9 first stage booster that sends the Dragon into space. This mission used the fourth cargo Dragon capsule, and each one is rated to survive three missions. The launch was also the last time that SpaceX used a “Block 4” Falcon 9, after which it phased out the booster in favor of the more reusable “Block 5” design.

SpaceX is now gearing up to send humans in these capsules, aiding NASA alongside Boeing’s Starliner missions to take over from the Russia Soyuz spacecraft missions. The Russian contract is set to expire November 2019, and Musk has expressed confidence that the first human missions can happen as soon as April 2019.

The floating capsule above could be the first step to the first crewed commercial flights with American astronauts.