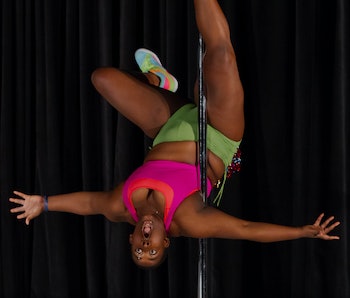 Careers rarely go according to plan. In Job Hacks, we shake down experts for the insights they cultivated on the way to the top of their field.

I was a career coach for black and Latino college students at the time, and I was just a regular gym rat. Then I took this class called pole. It was the hardest thing I’ve ever done. A lot of us have a similar story: try it as a hobby, then take more classes, start doing shows, then you start teaching, and shit just kind of creeps up. Especially if you’re in a job you don’t like, pole comes along and cannibalizes everything else. When I first started pole dancing, I tried to keep it on the DL hardcore. I really liked my job and didn’t want to do anything to jeopardize my budding Fortune 500 career. If you asked me 10 years ago what I thought I’d be doing today, I’d say I’d be on Wall Street with reasonable-sized heels and pearls and a suit, making big decisions and being expensive and great. Quickly I realized that wasn’t going to happen. I got fired because my jobs weren’t about that pole life.

I’ve been doing pole for eight years now. I’ve been so fortunate in the early part of my career to be invited to perform in competitions all over the country. But I always ended up being the biggest one. I wanted to do something where I wasn’t the only one to look like me onstage. That’s what Dangerous Curves was. We have a small studio in Bed-Stuy and another on the Lower East Side. Our reach is growing every year, people come from as far as Canada and Colorado. I also have private clients I work with — both pole and regular fitness. I also work for Body and Pole, the largest arial studio in the world, and I teach at Crunch in Crown Heights.

To go back a step to your other jobs firing you — what was it about pole, do you think? The stripper connotations? Are your clients strippers?

For one job I got fired explicitly because I teach pole. They did a background check. The vast majority of my clients are regular gymgoers. They either stumbled on this class or heard about it. A lot of them say, “I want to try pole but don’t want to be a stripper, is that OK?” They try it out of curiosity and stick with it out of the amazing benefits. I’ve taught grandmothers, lawyers, veterans of the armed forces, mathematicians, Ph.D.s, full-time mothers, and men as well. People are drawn to it initially because it’s that naughty exercise that’s scandalous — “Let’s be bad for a day.” But then they see no one gives a shit about that. I want you to sweat and have fun and I put fitness first. People usually have no idea when they start how hard it is. No one has ever left a class and said, “I don’t get why this is a sport.”

What skills do you need to be good at your job?

With any fitness profession, you’ve got to be personable, because people will do whatever you want them to if they respect you. Having a well-rounded experience within the sport is also critical to coaching others. I’ve been in competitions, shows, workshops around the country. I’ve given speeches about weight as it relates to pole. Because of those things, I have a varied perspective.

Particularly with pole, it’s very difficult and brings up a lot of insecurities that women in particular tend to harp on. Like weight. And there’s a huge sexuality component. Even though that’s not my focus, it’s still there. It’s a perfect storm for people to feel every emotion they’ve ever felt. You need to show them you accept them for all their faults, questions, and confusion. Then they’ll try stuff they wouldn’t normally try because they’re afraid of looking stupid. You need to be the biggest fool there. Coaching others is about not being afraid to look like a moron. I tell them, “You can’t embarrass yourself more than me!”

About the sexual connotations you mentioned — have you found that difficult? The assumptions that come with pole, the association with stripping? The jobs that fired you obviously made that association and came away with a negative impression.

Usually people who have negative connotations about pole have no idea what they’re talking about. They’ve never taken a class or seen a show. They make up assumptions, but I ran out of fucks to give. In terms of being compared to a stripper, I don’t think that should be used as an insult. Even before pole dancing, that’s where the popularity of the sport came from, to be honest. Particularly when other pole dancers look down on those in the adult entertainment industry, I say, “Sit down.” I don’t like when people try and use strippers as an insult. They’re people. But I say that assuming people involved in stripping are doing it out of their own free will.

What are some of the workshops you’ve taught?

One was a Divas In Training workshop. That focused on stage presence and building confidence onstage. Another was SWAG, for Salacious Wild Ass Gyrations. That was my twerk workshop. And my last is coaching plus-sized dancers. This is the one that’s in vogue right now because that’s my niche and my focus: Fitness and pole dancing work with non-traditional athletic bodies. I help them understand what we go through, how excess fat versus muscle plays a role in your body, and how to talk about it where people who aren’t plus-sized don’t sound like assholes. That’s one of my favorite workshops to do now because it pulls from my experience as a student.

When you talk about giving speeches about body image and how pole brings up a storm of feelings when people try it — it sounds like your job has a stronger psychological component than the average fitness instructor. How do you navigate that?

I have a lot of fitness certifications. I don’t have psych certification but I certainly know what it’s like to feel like shit. So much of it is mental toughness. It’s the entire damn sport. We’re no different from any other sport in that regard. Particularly for the underdogs, the pole can hand you your ass on a silver platter.

What’s an experience you’ve drawn from to help others who feel discouraged?

I was on America’s Got Talent. When I was onstage, Howard Stern said I was too fat to be a trainer and I’d never go anywhere and be a failure and I should have picked a different career. I expected that, but the troubling part is that people still have antiquated ideas about fitness and health. People still think the number one indicator of fitness is weight. While it does play a role, it’s not the end-all be-all. So many people I’ve worked with don’t know that. I was crying onstage, but it wasn’t because of him, it was because I made it to America’s Got Talent. That didn’t bother me, but my concern is that it would bother a whole lot of other people. I’m happy I didn’t internalize that. If this were a few years ago, I would have.

How did you prevent that from getting to you?

I’m extremely hard on myself. So I don’t think anyone can say anything to me that I haven’t said to myself or thought about at one point or another. When I was first getting started learning pole, I’d leave class crying a lot, feeling like shit. It was never because someone said something to me, but what I said to myself. What I didn’t know was that my timeline would be longer than everyone else’s. The things people would learn how to do over a six-month period took me two or three years. But I’ve got the most amazing friends and coaches. They didn’t give in to my bullshit. Before I went on TV, I had an honest conversation with myself — “Be prepared to be the Internet’s new fat black slut,” because people on the Internet are fantastic. But then they didn’t, because they didn’t air it. My guess is that I wasn’t a sob story but also not freakish or outlandish enough to warrant TV time. They show you the best and the worst and people in the middle don’t get love. I don’t know if I got lucky or if Jesus and the angels shielded my ears, but no one said that to my face when I was first getting started.

How did that opportunity on America’s Got Talent happen?

The producer scouted me out. They found my page on Facebook and said should send a video. They asked me to go to Chicago to do producer tryouts. Then we filmed it in Jersey in march. It was crazy to think where pole takes you. I never in a jillion years thought I’d end up in front of Heidi Klum and Scary Spice and Howard Stern and Howie Mandel. That was crazy, but it was not my first time in Hollywood.

I was a pole dancing stunt-double in an Adam Sandler movie. They wanted a plus-sized advanced-skilled black women between 25 and 30. Two days later, I’m on a train to Boston meeting Adam Sandler and the producers to be a stunt double [for actress Luenell Campbell]. Adam Sandler was nice, he’d occasionally be like, “You OK, kid?” because I was holding these ridiculous poses for many minutes at a time.

What would you say to someone just getting started in your field — either as a student or an instructor or a competitive dancer?

I think for anyone who’s ever thought they don’t count as an athlete, you do. It’s literally as simple as that. Know that you are not alone, you do add value to the athletic community, you can do some wild shit and defy physics as I have, if you just don’t give up.

More like this
Gear
Feb. 3, 2023
The 10 Best Fitness Trackers To Kickstart Your Health Goals in 2023
By Christian de Looper
Gear
Feb. 2, 2023
Garmin’s new Vivomove Trend is a smartwatch that’s designed to look dumb
By Jackson Chen
Culture
Feb. 3, 2023
Signs is Remembered as M. Night Shyamalan’s Alien Movie, but it Has a Human Heart
By Mónica Marie Zorrilla
LEARN SOMETHING NEW EVERY DAY.
Share: