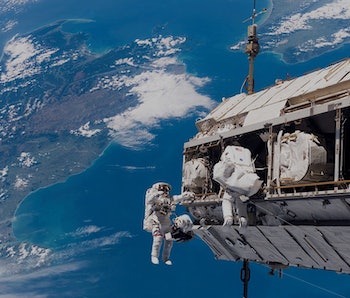 In the early hours of Thursday morning, astronauts aboard the International Space Station awoke to learn that the orbiting lab and occasional badminton court was slowly losing pressure. Flight control in Houston and Moscow identified the issue on Wednesday evening, but they decided the leak was minimal enough that they could let the crew sleep through it.

When the six astronauts woke up, work began to pinpoint the pinhole. With the assistance of ground control, the crew combed through the ISS, closing off modules one at a time. Eventually, European Space Agency astronaut Alexander Gerst found the hole, a teeny little rupture in the Russian Soyuz MS-09 module. According to Sputnik News, the breach was “believed to be caused by a micrometeoroid,” a tiny rock fragment that hit the ISS at high velocity. Gerst plugged the 2-millimeter-wide hole — which looks a lot worse in the magnified image — with his finger until the crew found a more permanent solution.

In the midst of the search and repair process, according to The Telegraph, NASA ground control officials reported, “Right now Alex has got his finger on that hole and I don’t think that’s the best remedy for it.”

Using the standard procedure for a leak, the crew put duct tape on the hole to keep more air from escaping into space. Then, they used a piece of medical tape with epoxy resin to form a more durable patch. Space.com reports that the epoxy formed a bubble that worried the astronauts, but it seemed to be holding.

It may sound surprising that ground control let the astronauts sleep while the air leaked out of the ISS all night, but NASA reported on Thursday that the leak had only caused a “minor reduction of station pressure.” Pressure sensors on the ground were monitored closely, and the astronauts aboard the craft didn’t even seem to notice the issue, so officials decided it could wait until morning. Nonetheless, it was the first time the ISS had taken potentially hazardous damage, so the event is noteworthy.

Small rock fragments are a near-constant threat in space, and the station has micrometeoroid shields in many places. Unfortunately, the portion of the Soyuz MS-09 module did not seem to have micrometeoroid shielding in place. All’s well that ends well, though, and the ISS crew has resumed normal activities.

“The crew are healthy and safe with weeks of air left in the International Space Station reserves,” European Space Agency officials announced on Thursday evening.