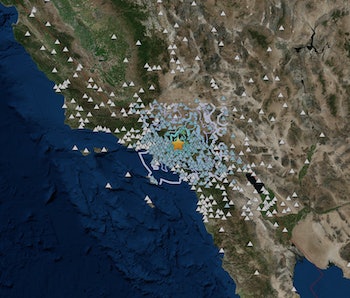 On Tuesday night, the greater Los Angeles area experienced a 4.4-magnitude earthquake that was felt up to 40 miles away from the epicenter. There were no reported injuries or damages, but experts warn that the worst may not be over, as the potential for secondary quakes remains. Fortunately, according to experts, there are a number of measures Californians can take to ensure their safety in case aftershocks occur.

In a tweet Wednesday morning, seismologist and earthquake expert Lucy Jones, Ph.D., warned that every earthquake has a small percent chance of being followed by something even larger. For this reason, there is a slightly greater chance of a big quake on Wednesday in comparison to other nights.

Jones advised that if an earthquake does occur Wednesday evening, members of the public should remain in bed and cover their heads with a pillow.

Dr. Estelle Chaussard, professor of geology and geophysics at the University at Buffalo told Inverse that this tactic was useful, as most injuries from an earthquake are caused by falling debris. However, she emphasized that it is safer to get out of bed and seek shelter, if possible.

“That means drop on the floor, seek cover under a desk or a structure that would protect you from falling objects and hold on until the shaking has stopped,” said Chaussard. “Ideally, if near a exit, the safest place to be during an earthquake is outside and away from any structure,” said Chaussard.

Earthquakes are the result of a release of energy caused by friction between fault lines beneath the surface. In most cases, earthquakes come in clusters, with earthquakes before the main quake called foreshocks and those after called aftershocks.

The risk for a significant earthquake hitting southern California on Wednesday night is small, but according to Chaussard, there is no rule for the size of secondary quakes. They can be smaller or larger than the first. Regardless, it is still important to understand how to stay safe in such scenarios, as you really never know.