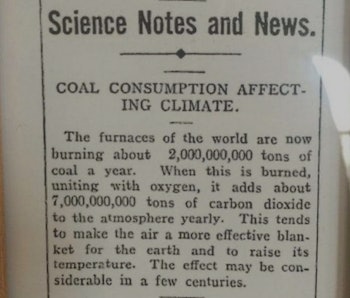 A post that reached the top of Reddit on Thursday today offers a glimpse of what could have been, had the world heeded warnings of climate change when William Taft was still president. A “Science News and Notes” column printed exactly 106 years ago, titled “Coal Consumption Affecting Climate,” serves as a stark reminder that it’s never too early to worry about global warming.

In 2016, Snopes confirmed that a New Zealand newspaper did indeed publish a brief article about how burning coal could raise global temperatures. Its author notes that approximately 2 billion tons of coal were burnt each year back in the early 20th century, and that those emissions combine with oxygen to add 7 billion tons of carbon dioxide to the Earth’s atmosphere. “This tends to make the air a more effective blanket for the earth and to raise its temperature,” the article reports. But the author isn’t too worried, since they expect the effect won’t be felt for another few centuries. Perhaps they were not factoring in the exponential growth of the then still-new automobile.

While the New Zealand publishers of 1912 couldn’t predict the drastic rise of modern industrialism over the next century, today’s climate scientists estimate that negative carbon emissions are needed to meet the Paris climate agreement goals.

At this point, global temperature increase appears an inevitability, but the Intergovernmental Panel on Climate Change seeks to reduce the damage to between 2 and 1.5 degrees Celsius. For that to happen, the percentage of atmospheric carbon needs to fall to somewhere between 430 and 480 parts per million. Almost all options require pulling carbon out, not just reducing the global footprint. There are options, including planting tons more trees, but as with all things climate-related, the future is bleak.

Conversation around the photo has revolved around the state of climate science in 1912, including more in-depth reporting done by outlets like Popular Mechanics. As one commenter pointed out “Billions in profit has been made since ignoring this 106 years ago.”

This newspaper clipping from a bygone era is indicative of the pattern omnipresent in climate science. Researchers reach alarming conclusions that require immediate action from governing bodies, industrial giants lobby for political inaction, and soon — now, even — people all around the world face drastic repercussions.

If only the original author of August 14, 1912’s “Science Notes and News” could see where we stand now, they’d probably have a different estimation of when the effect of climate change “may be considerable.”