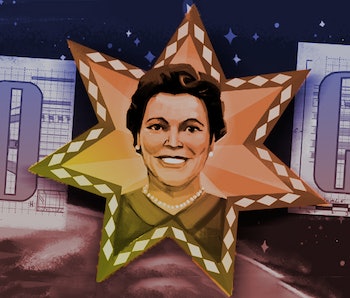 While Mary G. Ross’ contributions to aerospace research were vast, many of them are still unknown. Much of her career was spent at Skunk Works, the top-secret project of Lockheed’s Advanced Development Program, where most of the theories and papers she produced are still classified. However, she was part of five key projects during her time at the top-secret program that are now public. These projects and their key concepts give clues as to the extent of her influence in establishing the key principles of space travel used today.

In 1942, Ross, who was a member of the Cherokee Nation, was hired as a mathematician at Lockheed, but the company would later send her to UCLA for a certification in engineering. After World War II, many women who were hired by companies to replace men in combat were eventually let go after soldiers returned. Ross kept her position at Lockheed and in 1953, the company trained her as the only woman out of 40 engineers in its then-secretive Lockheed Advanced Development Projects, usually known as Skunk Works.

On Thursday, Google celebrated what would have been Mary G. Ross’s 110th birthday with a commemorative doodle. Ross was a Native American engineer who developed some of the first concepts for flyby missions past Venus and Mars and paved the way for modern space exploration. While so much of her research is still classified, these five roles scratch the surface of Ross’ vast work in bringing more humans to space.

Her primary role at Skunk Works was to work on “preliminary design concepts for interplanetary space travel,” by which she drafted and designed prototypes for manned and unmanned earth-orbiting vehicles.

Her earlier work at Lockheed may have influenced this assignment, as she was first hired by the company to study the effects of pressure on the P-38 Lightning fighter plane as it neared the sound barrier. As the first plane to go more tha 400 m.p.h., Ross was tasked with improving its aeroelasticity under high pressure. Understanding these dynamics contributed to her designs for vehicles that could withstand the pressures of leaving Earth’s atmosphere.

2. She Worked on Civilian and Defense Projects

Ross may have developed the concept of a Space Force long before the Trump administration proposed one. According to records, Ross worked on Lockheed’s “earliest studies of orbiting satellites for both defense and civilian purposes.”

When Vice President Mike Pence outlined the new plan for a Space Force, a proposed sixth branch of the US military, he made note of the “sophisticated constellation of military satellites” that are already deployed. Ross was one of the first engineers to conceptualize the purpose and execution of defense satellites, which has become an increasingly sought-after strategy from space agencies, both foreign and domestic.

3. She Helped Build the Agena Rocket

By 1958, Ross’ work concentrated on defense systems, where she evaluated the feasibility of future ballistic missiles. During that time, she focused on the distribution of pressure when launching missiles, which also lent research to the Agena rocket project. Her understanding of vehicle flexibility helped build the Agena rockets that were instrumental during the Apollo moon program of the 1960s and ‘70s.

“Often at night, there were four of us working until 11 p.m.” Ross said of her work on the project. She focused on the operational requirements of the Agena, allowing for manned-space travel for the following two decades.

One of Ross’ most well-known and important innovations are her preliminary design concepts for flyby missions to Venus and Mars. These are found in Lockheed’s third planetary flight handbook, which she authored, that explains space travel specifically to Venus and Mars. The handbook goes so far as to cover how to schedule flights from 1960 to 2006 by looking at planetary orbit data.

“We were taking the theoretical and making it real,” Ross said. While so much is still unknown about the extent of her work Skunk Works, her public research creates the foundation for space travel that is still being applied today.