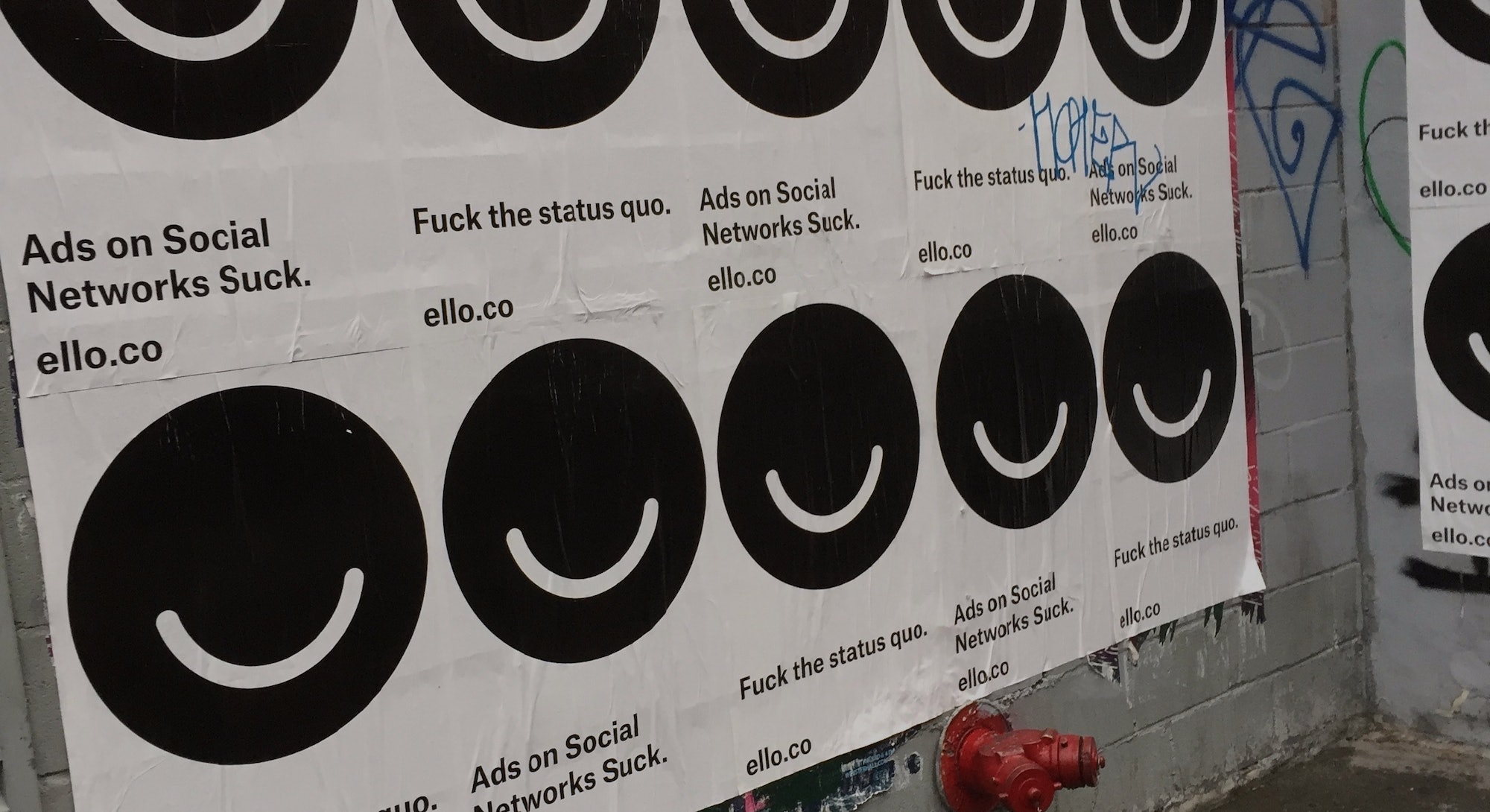 Last month, I came across some newly placed posters while walking home. They were there for the still young (adolescent?) social media network Ello and featured the company’s faceless smile logo coupled with phrases like “Ads on Social Networks Suck” and “Fuck the status quo.” The posters looked more like the product of fringe political party run by blind people than a product of the social web. They were hard to ignore.

Launched officially last March, Ello peaked last September. The media positioned the little site as a Facebook competitor that promised to not sell user information, maintain a clean interface, and, most newsworthily, ban advertising. Invites were hard to come by, as the site was — and still is — in beta so there was also an aura of exclusivity and next attached to its minimalist branding. This faded, for me at least, after people I knew joined, got bored, and moved on. The cycle of empire had run its course.

Then, in June, Ello was ready to return to the public spotlight with its new advertising push.

“We thought it would be interesting to do an ad campaign about how ad campaigns suck,” Paul Budnitz, one of the site’s co-founders, told me when I called up to ask for clarification. “We also see Ello as the beginning of a social movement about a lot more about safety privacy and the quality of their experience too,”

That line of thinking fits in with what’s been Ello’s somewhat abstruse mission. The site’s functionality exists somewhere between Tumblr and Facebook, but that isn’t how the site views itself, “[W]e also see Ello as the beginning of a social movement about a lot more about safety privacy and the quality of their experience too,” says Budnitz. Though social media platforms like Twitter and Tumblr in the last few years can be found tied directly to political and social movements that are built from the users not the creators.

In addition to the the physical ads placed around New York, Ello has purchased targeted ads on Facebook that use the same aggressive language. When asked about the not-so-subtle irony, Budnitz got annoyed. “We don’t really consider ourselves competition to Facebook and in a really tongue-in-cheek way point out what’s really going on over there. We’re creating more awareness,” says Budnitz. “We think these [other social media networks] are terrible for social networking, but awesome ad platforms.”

The campaign feels a bit like Kurt Cobain wearing a “Corporate Magazines Still Suck” shirt on the cover of Rolling Stone — minus the Kurt Cobain. But it remains hard to know what status quo Budnitz is against. He defines Ello as anti-advertising and refuses to participate in the economy of corporate access without raising a rhetorical finger against commerce.

Budnitz mentioned that, later this year, Ello will start allowing individuals to sell products and services directly to their followers on the site. It’s worth noting that Ello users will have to opt into that experience, and also worth noting that it moves Budnitz’s network even closer to the point of sale.

“The rhetoric we used earlier on and the way we’re characterized in the press as ‘anti-business, anti-Facebook,’ we’re not anti- any of those things, we just think we have a better way,” says Budnitz.

Ello started with a manifesto and this month introduced a Bill of Rights, yet it’s supposed to be a place ready for people to monetize. Usually turning the norms of society doesn’t fall right back into the hands of capitalism. The promise of no ads, not selling user data or skewing feeds based on what companies are willing to pay for sounds enticing. But when the site is so ready to sell products and is eager about brand usage, I wonder why the revolution favors selling me kitchen knives over a banner ad.