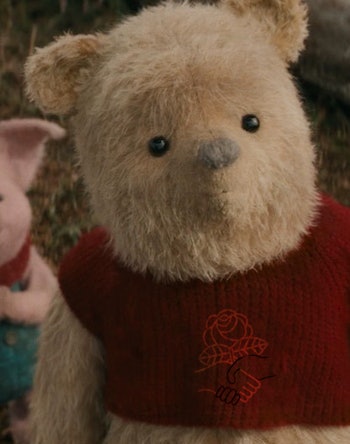 We’ve seen this story before: Beloved protagonist goes on fantastic childhood adventures, grows up, loses track of what’s important, and needs to be visited by characters from his past in order to reconnect with the goodness of youth. It’s the plot of Hook, the Robin Williams movie about an adult Peter Pan, and it’s also the plot of Christopher Robin, Disney’s new live-action Winnie the Pooh film.

Christopher Robin’s unexpected twist, though, is that the lesson Christopher Robin learns at the end isn’t about the power of imagination, it’s about capitalism and the importance of labor rights. Despite being set in the ‘40s, the film strangely resonates with the failings of capitalism that are causing so much unease and dread today, all wrapped-up, somewhat clumsily, in a kids movie that’s equal parts morose and sweet.

Ewan McGregor stars as a grown-up Christopher Robin, and as an adult, he’s a far cry from the laid-back, optimistic youth we meet at the beginning of the movie as he says a final farewell to Pooh. Adult Christopher Robin, having served in World War II, works as an efficiency manager at a luggage company forced to forgo a weekend getaway with his wife and daughter in order to finish some very important business his boss throws on him. He’s so caught up in work that he’s alienating his family, and it’s only when Pooh leaves the Hundred Acre world and visits him in London that he has a breakthrough.

Hook, starring Williams as an adult Peter Pan, essentially has the same plot. In the 1991 movie, Peter is a corporate lawyer who, in a classic ‘90s movie trope, misses his son’s big game because he’s working. A trip to Neverland allows him to reconnect with his true self and be a better father.

Similar stories, sure, but there’s a key difference in the way the movies explain Christopher Robin and Peter’s depressing adult personas. Peter’s a workaholic, yes, but Hook largely portrays that as an error of judgment on his part. Peter is just focusing on work instead of his family, and we don’t get as much of a sense of what his work means in a broader context — the job exists largely as an establishing character trait. Christopher Robin, meanwhile, takes a more nuanced approach, to grim effect. Christopher Robin’s priorities are a bit out of whack, but only because that’s what’s demanded by the capitalistic society that exists in the real world outside of the Hundred Acre Wood.

Audiences are supposed to be angry at Christopher Robin for blowing off his wife and daughter to work over the weekend, which, to be fair, is a really sucky situation for everyone. But, if Christopher Robin doesn’t find a way to cut costs, his boss — a perfect send-up of sniveling nepotistic managers who do nothing but take credit — will take an ax to his department. People will lose their jobs and their livelihoods. Christopher Robin’s focus on work isn’t just for his own sake, he’s trying to keep people employed while facing pressure from terrible bosses and a struggling industry.

In Hook, Peter’s job becomes pretty much meaningless once he goes to Neverland. His kids have been kidnapped, after all. But Christopher Robin’s job is possibly the most important plotline in the entire film, infecting all aspects of his life — even his childhood, because he had to leave the Hundred Acre Wood in the first place to go to boarding school in preparation for a miserable career. Again, this is a movie that’s set in the ‘40s, but it taps into modern fears of crumbling work-life balance and the idea that employees are always on call, even when they should be vacationing.

Christopher Robin’s job turns him into a bit of a bad guy, but the job itself is arguably the movie’s real villain. Christopher Robin is, strangely, the second-most pro-labor movie of the year after Sorry to Bother You, although there’s obviously a gigantic margin between the two. This pro-labor throughline reaches new heights during the movie’s climax, when Christopher Robin, having reconciled with Pooh as he makes a mad dash back to London in time for the board meeting, comes up with a novel way of saving the company.

With the important papers he’d written his original plan on lost to the wind, Christopher Robin has an epiphany. He tells the company’s founder that he should give all of his employees on all levels in every sector of his vast business empire paid vacation time. Also, they should all get raises. At first, the boardroom of stuffy old white men is aghast, but Robin explains that by giving all those employees time off and disposable income, they’ll be able to afford the products they’re making, and the suitcases they buy for their newfound vacation time will keep the company afloat, no cuts needed.

It’s not quite the stirring call to unionize that you might have been hoping for (way to give all the credit of the labor movement to one dude in middle-management and a magnanimous CEO), but Christopher Robin’s deus ex machina is labor rights. That’s wild stuff for a movie ostensibly about growing up and catching up with a beloved silly ol’ bear.

Christopher Robin is a strange movie, one that pinballs in tone from scene to scene. Sometimes it’s a beautiful art film with echoes of Where the Wild Things Are’s aesthetics. Other times it’s sincere-but-goofy kids fare, and then there’s this inexplicable examination of capitalism. With so much inconsistency, it’s hard to latch onto anything beyond “Pooh is cute” and “an economic system that forced Christopher Robin to be the disappointing sort of man he became seems like it has fundamental flaws.”

Did Christopher Robin mean to be a Disneyfied introduction to the broadest tenants of entry-level democratic socialism? Given that Disney is now a super-monopoly that owns pretty much everything you love (and it’s gonna have to fire thousands of people in order to complete its lucrative merger with Fox), it feels safe to say that the House of Mouse doesn’t want to tear down the system. Neither does Christopher Robin, really. Labor rights win in the end, but so does the idea of consumption and buying things, so the message is muddled.

Compared to Hook, which came out just as the US was headed into the economic boom of the ‘90s, the role of work and how it impacts both individuals and society is much more prevalent in Christopher Robin. Maybe that’s because Americans are being increasingly open about the strain capitalism has on their daily lives. Adulthood has been placed into a larger, more uneasy world than it was in Hook’s time. Widening income inequality, the failings of the gig economy, and economic uncertainty are 2018’s heffalumps and woozles, and Christopher Robin gets that, on some unexpected level.

Christopher Robin is now in theaters.