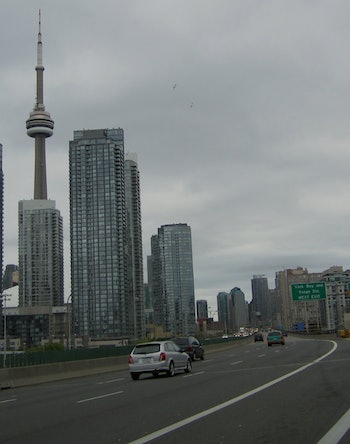 Uber called it in June when they declared Toronto the “perfect city” for ridesharing. It was a bold statement to make, especially for a company that spends an increasing amount of time in bumper-to-bumper litigation. Even the city’s call for an injunction, which was denied earlier this month, didn’t stop Uber from rolling out its pilot ridesharing program UberPOOL during the Pan Am Games, which are taking place in “The 6.” With the sudden influx of tourists and athletes, the city is living up to the carpooling hype. What’s Toronto got that other cities don’t?

The two-week UberPOOL pilot rolled out in Toronto on July 14, right after the Games started. The company reports that over 2,000 people used the carpooling service on launch day, with 60 percent of riders using it during morning and afternoon rush hours. It didn’t hurt that all rides were free during these periods, but the company’s still took those stats as a sign that Raptors fans are open to the idea of carpooling in general. And there are multiple reasons Torontonians might be down: Uber Canada spokesperson Susie Heath told Inverse that the pilot’s success stemmed from “Torontonians wanting to get around our City and help take pressure off our roads, parking and the environment.”

While she’s right on all counts, she forgot one crucial point: carpooling, above all else, saves people time.

In a phone interview, the marketing head for the Toronto-based ridesharing app Blancride Justin Kozuch said that his company has also seen increased ridership during the Games, and he chalks up that success to one thing: the city’s newly implemented high-occupancy vehicle lanes. Metrolinx, a regional transit service, has also reported the success of its carpooler matching program since the HOV lanes were put in place.

To use these lanes, you need to have at least three people in your car; otherwise, you risk a $110 fine. The city implemented them to help speed along traffic during the Games, and that’s pretty much what’s happening. In fact, they move so much faster than single-car lanes that creative Torontonians have even tried strapping seatbelts onto mannequins.

“The conversation will then push back to encouraging people to carpool but not actually creating the infrastructure to encourage that behavior — to actually get people out of this one-car, one-driver kind of mindset and push them toward a one-car, multiple-passenger kind of mindset,” says Kozuch. “It’s great to talk about it, but at the end of the day, if we’re not putting tax dollars to these infrastructure projects, there’s no point in talking about carpooling.”

The perfect city for ridesharing, then, isn’t just one that supports apps like Uber and Blancride, it’s one that gives citizens an incentive to carpool in the first place. Making Toronto’s temporary HOV lanes permanent would be the first big step toward changing its riders’ behaviors. The promise of a faster commute home, says Kozuch, is what will really get riders interested.

Sure, the HOV lanes have left even less room for solo drivers to commute, but there’s no denying that they work really well for those willing to carpool. And that’s a fact Ontario isn’t going to ignore: In a news conference today, Premier Katharine Wynne said that the lessons learned from the HOV pilot could pave the way for the implementation of high-occupancy toll lanes. Cars with multiple passengers would be able to use these HOV lanes for free, while single drivers would have to pay a toll. It’s a brilliant solution that won’t just help get cars off the road but also create a way to bring in revenue for public infrastructure, both from fees and from ridesharing apps, if cities decide to charge them (and considering HOT lanes would essentially enable their businesses, they could absolutely justify that decision).

Toronto’s initial reactions to the proposed HOT lanes, at least judging by this blogTO post, are almost universally positive. With enough support, the city could very well succeed in implementing ridesharing-friendly infrastructure — a huge step toward reducing road traffic and, more importantly, helping to shift the ways in which the world thinks about transportation. Long live the 6.