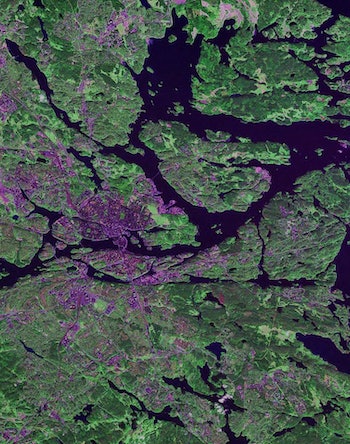 Stockholm embraced environmentalism and renewable energy some time back, winning the first European Green Capital Award in 2010. But what’s impressive about the place isn’t that these Scandinavians got there first — the thriving local economy put them at a marked advantage — it’s the refusal to become complacent. The city has continued to aggressively lower transport emissions and increase clean water standards. The latest push: getting rid of cars, perhaps entirely.

But Stockholm’s energy ambitions don’t stop there. The city plans to be fossil-free by the year 2050 and increasingly reliant on wind and solar sources for electricity and algae for fuel. To keep moving in that direction, city planners will have to contend with a population boom. Some urban growth experts predict Stockholm will see its population increase from 900,000 to a whopping 3 million in 30 years, largely due to immigration.

Inverse spoke with Tigran Haas, Director of the Urban Planning & Design Masters Program at KTH Royal Institute of Technology in Stockholm, to find out how the city can reconcile its sustainability goals with the need to provide resources and opportunities to migrants.

What does Stockholm’s current infrastructure look like? How are these systems meeting the needs of the city right now?

The city provides infrastructure for several different transport options. There are car traffic, rail and bicycle routes. The Stockholm Ring Road [essentially a beltway road that encircles the central district of the city] will be completed soon. We have a vast network of railway stations and tracks — rail, commuter, light rail. And from next month car traffic will be reduced and even eliminated from core parts of the city.

Work towards sustainability — energy efficiency, lowering carbon emissions, ecological housing etc. continues. Major problems associated with lack of housing, especially affordable one. Large post-war housing estates need renovation and energy efficiency schemes but above all, breaking the bonds of ethnic and economic segregation and concentrated poverty is a must.

What will be the biggest challenges that Stockholm faces in the next 25 years or in 50 years? What are the causes?

Migration of people from rural areas and small towns but even more from other countries, political, economic and climate refugees. Instability around the world is the main cause for international immigration, and local immigration is spurred by the slow but constant eradication of livable countryside and small towns in the country. Again, the lack of housing, especially affordable homes, will be a major issue.

What does Stockholm need to do to deal with the massive influx of immigrants? How can it adapt?

Housing market and tenure forms need to be fundamentally changed. The real estate sector needs to start working in a different way — legislation transformation is a prerequisite. Affordable and just solutions for all is a challenge, as well as reaching all the goals of sustainable development and resilient cities in the next 25 years. Welfare state still functions but it will need to adapt too, especially when it comes to the young, migrants and immigrants and the exploding Stockholm senior city population. We’ll also need to make sure the rising elderly population can be cared for.

What are some specific projects currently underway that are looking to meet these concerns?

There are several different large sustainable communities and ecological design estates being developed — such as the Royal Seaport, the largest urban development area in Sweden which will add 12,000 homes and 35,000 workplaces; and Årstafältet, another area which will add affordable apartments for 15,000 residents. Both of these projects are building off lessons learned from the Hammarby Sjöstad Flagship project of green eco-cycle neighborhoods.

What kinds of other concepts inform the approach of urban designers in Stockholm?

Placemaking schemes are happening in different ways, still very much of conventional Nordic Urbanism with a few Starchitecture projects. Density and Walkability are hallmarks of the new Stockholm City Plan with Acupuncture projects but a lot remains to be done. Housing estates, bicycle routes and more affordable housing are a must as well the over reliance and dominance of the automobile needs to be resolved, even with fantastic public transportation that Stockholm has.

How is new technology in engineering, architecture, and urban design making it easier to address these problems? What are some technologies we may still need to develop in order to ensure that Stockholm continues to thrive when 2050 arrives?

Smart cities ideas need to be adapted, refined and reinterpreted for specific places in order to work. Cultural Urbanism — the aspect of urbanism that reflects local culture and encourages social interface — has yet to start living its life and get the focus it deserves. Smart homes, smart devices and smart living will have to be coupled with a realization of the perpetual climate change and energy crisis where resilient, zero carbon, smart and livable cities for all will be pivotal. Architecture and urban design need to move from just being green, ecological and flagship art to all inclusive, affordable, beautiful and socially responsible as well as place and context dependent.

Are there lessons from other countries that can be applied to the urban development of Stockholm?

We’re looking at Austria when it comes to housing, especially affordable and public homes. Copenhagen is a great example of how Stockholm bicycle routes might be done and how in general one can treat public spaces better. The US offers new tactical urbanism schemes and lean approaches to building housing and interesting things in the real estate’s sector. Switzerland itself is a great example of a public transport-oriented place (Zürich) that also integrates all spectra of society, from young to old.