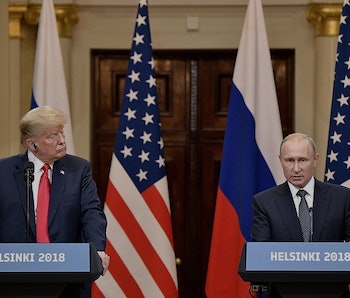 A “swarm” of American voters connected with with A.I. algorithms refuted President Donald Trump’s claim that he misspoke when he said on Monday he believed Russia over the FBI when it came to allegations of Russian interference in the 2016 presidential election.

Unanimous A.I., the San Francisco-based technology firm that uses “swarm intelligence” comprised of people who make a collective decision, has a very good track record when it comes to predicting major events — the Kentucky Derby, the Oscars (94 percent accuracy), the NCAA tournament — but it’s also used as a public opinion polling system. In this case, a group of 44 people — 42 percent independent, 29 percent Republican, and 29 percent Democrat — were presented with questions about the latest scandal created by the president. Trump walked back his Monday comments on Tuesday after being criticized from all sides. “The sentence should have been: ‘I don’t see any reason why it wouldn’t be Russia,’” Trump said. But few people believed him publicly, including the swarm. You can see its opinion below:

One area where the swarm wasn’t so sure? If Russia’s meddling affected the outcome of the 2016 presidential election. The swarm was 58.4 percent sure that meddling actually mattered. The FBI noted in its report of the interference that it didn’t assess if the meddling had an effect. “Meddling” by Russia is best exemplified in government documents as Russian agents hacking into the email server of Hillary Clinton and leaking emails to a third-party organization — Wikileaks — which published them systematically in the weeks before the election to erode trust in her and sway the election toward Trump. Trump says he did not know about it, but the investigation by Robert Mueller continues to find out if he’s telling the truth.

Louis Rosenberg, Ph.D., created a technology he calls “Swarm Intelligence” that harnesses the power of collective human intelligence, which he thinks can go toe-to-toe with neural networks being developed by Google, Apple, IBM, and other major technology firms. “A brain is a system of neurons so deeply connected that an intelligence forms. A swarm is a system of brains so deeply connected that an intelligence forms,” Rosenberg said during a TEDx talk in 2017. “A swarm is a brain of brains and it can be smarter than any individual member.”

The swarm also thought most Americans view Russia as an adversary, that Trump’s remarks after the summit were “fairly impactful,” and that there was a 50 percent chance Trump would lose support among independents after his infamous Helskinki comments.

The full report from Unanimous A.I.’s swarm on the Helskinki Summit is over at unanimous.ai/helsinki-summit.