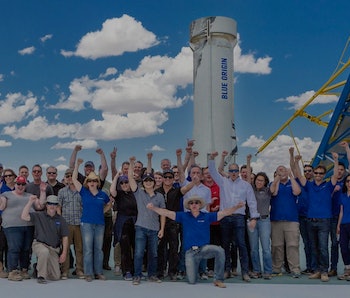 Blue Origin, the aerospace company started by Amazon founder Jeff Bezos, announced on Tuesday that it would fly its New Shepard rocket for the ninth time on Wednesday morning, “pushing the rocket to its limits” and taking some employee payload with it on its brief journey, too.

Below’s the full list of what Blue Origin will send up in the rocket during the “high altitude escape motor test” that launches from the company’s West Texas launch site. Blue Origin expects to soon send people up in its rockets at a cost of about $200,000 per person for brief trips to sp

Last on the list was this inclusion: “A special addition to the Mission 9 payload manifest is a suite of payloads from Blue Origin employees as a part of our internal ‘Fly My Stuff’ program.”

“Fly My Stuff” wasn’t the idea of Bezos, though. Bigelow Aerospace had a similar program in 2006-2007 called “Fly Your Stuff,” which allowed customers of the company and others to send photos and other small items into space for a price. People sent all sorts of sentimental objects up in the Genesis II spacecraft, as the below photo shows:

The rocket launches at 9 a.m. Central from Texas. Similar to SpaceX launches, a webcast will begin about 20 minutes before launch at blueorigin.com.

Here’s the full list of Blue Origin payload that is going to space and back on Wednesday:

On New Shepard Mission 8, Solstar demonstrated the first commercial WiFi in space. On this reflight, they will take advantage of the Crew Capsule’s high altitude escape and continue testing WiFi access throughout the flight.

The GAGa payload investigates the statistics of granular gases, dilute collections of solid grains that interact by random collisions. Data from GAGa on New Shepard Mission 9 will help validate existing theoretical models and contribute to understanding the dynamics of related systems like avalanches and cosmic dust clouds.

SFEM-2 was first flown on Mission 8 of New Shepard, and will collect additional data on Mission 9. The experiment will record vehicle conditions including cabin pressure, temperature, CO2, acoustic conditions, and acceleration.

This experiment marks the first flight of the JANUS 2.1 platform with sensors to monitor magnetic fields and ambient pressure inside the vehicle. Previous versions of JANUS were flown on New Shepard Missions 6 and 7.

VIP DL is a technology demo for an active stabilization platform that aims to allow the most sensitive payloads flying on New Shepard to be isolated from ambient vibrations, allowing for even higher precision microgravity studies.

The first of Blue Origin’s New Glenn customers to purchase a slot on New Shepard, mu Space’s payload includes an assortment of scientific and medical items, several textile materials they plan to use on their future space suit and apparel, and other special articles for their community partners.

A special addition to the Mission 9 payload manifest is a suite of payloads from Blue Origin employees as a part of our internal “Fly My Stuff” program.

The New Shepard rocket system enables payloads to spend three minutes in microgravity, and the company advertises on its “Payloads” page an “ideal” setting for “physics, gravitational biology, technology demonstrations, and educational programs.”

More like this
Science
6.22.2022 10:45 AM
NASA hints its Artemis Moon rocket may not need a fifth dress rehearsal
By Doris Elín Urrutia
Science
6.24.2022 4:30 PM
NASA’s Artemis 1 mission is now taking the final steps toward its historic Moonshot
By Doris Elín Urrutia
Science
21 hours ago
NASA move could help the International Space Station stay in orbit without Russia
By Nancy Atkinson and Universe Today
Related Tags
Share: