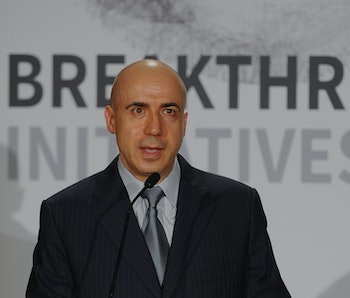 Yuri Milner ascended from mere billionaire tech investor to Space Jesus after announcing he’d invest $100 million of his own fortune into an unprecedented search into alien life.

“It’s just a miracle,” Frank Drake, an emeritus professor at the University of California, Santa Cruz, told The New York Times after Milner’s announcement at the Royal Society in London Monday.

“This is beyond my wildest dreams,” added Dan Werthimer, a Search for Extraterrestrial Intelligence (SETI) researcher at University of California, Berkley.

Forbes reports this is the biggest grant ever for SETI, the majority of which will be spent on Breakthrough Listen, which could cover the unexplored 98 percent of the universe’s electromagnetic frequencies.

Besides the 10-year scientific study, which will use two of the world’s most powerful telescopes, $1 million will be designated as prize money for an international competition to create digital messages representing humanity.

Milner was accompanied in his announcement by Stephen Hawking, who believes in the existence of alien life and values finding it, even if he suspects finding it could be disastrous.

“We don’t know much about aliens but we know about humans,” Hawking told reporters. “If you look at history, conflicts between unmanned and less intelligence organisms have often been disastrous from their point of view. Encounters between civilizations with less-advanced tech have gone badly for the less-advanced. A civilization reading one of our messages could be billions of years ahead. If so they will be vastly more powerful and may not see us as any more valuable than we see bacteria.”

Of course, there’s only one way to know for sure. Or at least to light fire to $100 million trying.