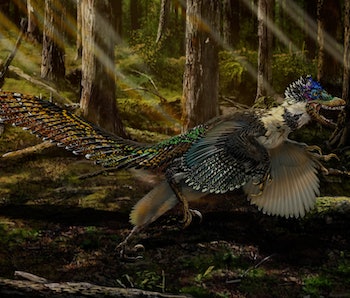 Rendering of the dinosaur by  Zhao Chuang
Peter Rugg
July 16, 2015

Holy shit, we’re still discovering new dinosaurs and they look like ravenous nightmare machines. All is wonder and joy.

Scientists have announced the discovery in China of a near cousin, the velociraptor. The Zhenyuanlong suni is terrifying, yes, but also an important link in unraveling evolution in both dinosaurs and birds.

The new species was announced by Junchang Lü and Stephen Brusatte in Scientific Reports, describing it as one of the largest dinos of its type by being an estimated 5 feet in length, with extremely short arms, a ton of spectacular feathers, and razor teeth. Imagine a few of those coming at you at night in the middle of a jungle.

Over at Live Science, Brusatte tells reporters its still uncertain if the feathers were used in flight or for behaviors developed later in the evolutionary process.

More like this
Science
Sep. 15, 2022
This tiny reptile roamed with the dinosaurs — and could solve an evolutionary mystery
By Jennifer Walter
Science
Sep. 11, 2022
These funky salamanders may help unlock the mysteries of the brain
By Ashley Maynard and The Conversation
Science
Sep. 24, 2022
Astronomers may have discovered a way to tell if Betelgeuse is about to blow up
By LAURENCE TOGNETTI and Universe Today
Share: