It seems like we can’t go more than a few weeks without another Battle Royale-style game showing up to challenge Fortnite, but the latest coompetitor feels different. Realm Royale adds some interesting new features to the format, with a focus on making it just as fun to watch as it is to play.

As a result, Realm Royale is already one of the top five most viewed games on Twitch after launching earlier this month on June 5. However, it still doesn’t have a dedicated forum or even an official website to offer any guidance for new players. So we’re here to help. Here’s what to know about the latest battle royale game from Hi-Rez Studios.

Realm Royale is a spin-off of Hi-Rez’s third-person MOBA shooter Paladins, but much like Fortnite Battle Royale, it’s already become much more popular than its predecessor.

If you’ve played Fortnite, then the basics of Realm Royale will look familiar to you. Instead of the Battle Bus, you start off in a zeppelin and skydive down onto the map. There’s chests on the ground containing loot and a creeping fog that continually shrinks the map. You can queue up as solo, duo, or groups.

But that’s where the similarities stop, because Realm Royale is most certainly not a Fortnite clone. Here are five ways it sets itself apart.

5. You can choose from five different classes

Yep, and each one has different attributes, abilities, and even special weapons. You can be an Assassin, Engineer, Hunter, Mage, or Warrior. Just based on their titles, you can probably guess how each class plays.

Here’s an example from professional streamer Daniel Francesca, who utilizes the Assassin’s Blink ability to make short teleports and throws Concussion Bombs to knock his opponent into the air for an easy shot.

Each class also has an exclusive legendary weapon, which can only be acquired through forging.

4. If you want the best items and skills, you need to make them

If you want to get the best items in Realm Royale, you have to build them. Players can break down unwanted items by shooting them and use the shards to craft legendary gear and potions. Legendary gear includes armor, weapons, and even abilities you can’t find out in the wild.

Forging is also the only way to get your class-specific legendary weapon. Warriors can make the throwing axe, a projectile weapon which does more damage the further it’s thrown. Assassins can make the sniper rifle which is pretty self-explanatory.

Crafting can only be done at designated forges so be careful. The crafting menu takes up your whole screen and you won’t be the only one thinking about making some new goodies.

3. You can collect a full suit of armor with benefits

Your character has four separate slots for armor: helmet, breastplate, gauntlets, and greaves. All of them contribute to your armor rating but epic and legendaries pieces will also boost your stats. A legendary breastplate will give you regenerating health while legendary gauntlets will reduce your weapon swap and reloading speeds.

If you get attacked, you can refresh your armor points by chugging armor potions.

2. There are a nice variety of weapons to suit your playstyle

Realm Royale is styled as a fantasy game but that doesn’t mean the weaponry is stuck in the Middle Ages. You’ll find swords and crossbows in here alongside shotguns and plasma launchers. That means there’s a nice mixture of projectile and hitscan weapons to suit different playstyles.

However, there are no automatic firearms in the game yet. That means you need to have a steady hand in order to net kills, especially with projectile-based weapons like the longbow.

When you get downed in Fortnite, you’re zapped off the map or keeled over into a helpless crawl until your teammates can save you.

In Realm Royale, you get turned into a chicken. This has often resulted in some tense, butt-clenching moments as Ninja and TimTheTatman have experienced first-hand.

However, if you manage to survive as a chicken for 30 seconds, you’ll be back into your human form and ready to go. With some skill and some luck, this is completely possible. In fact, the windows in Realm Royale are specifically designed so that chickens can jump through them but human models cannot.

Do NOT underestimate the chicken. 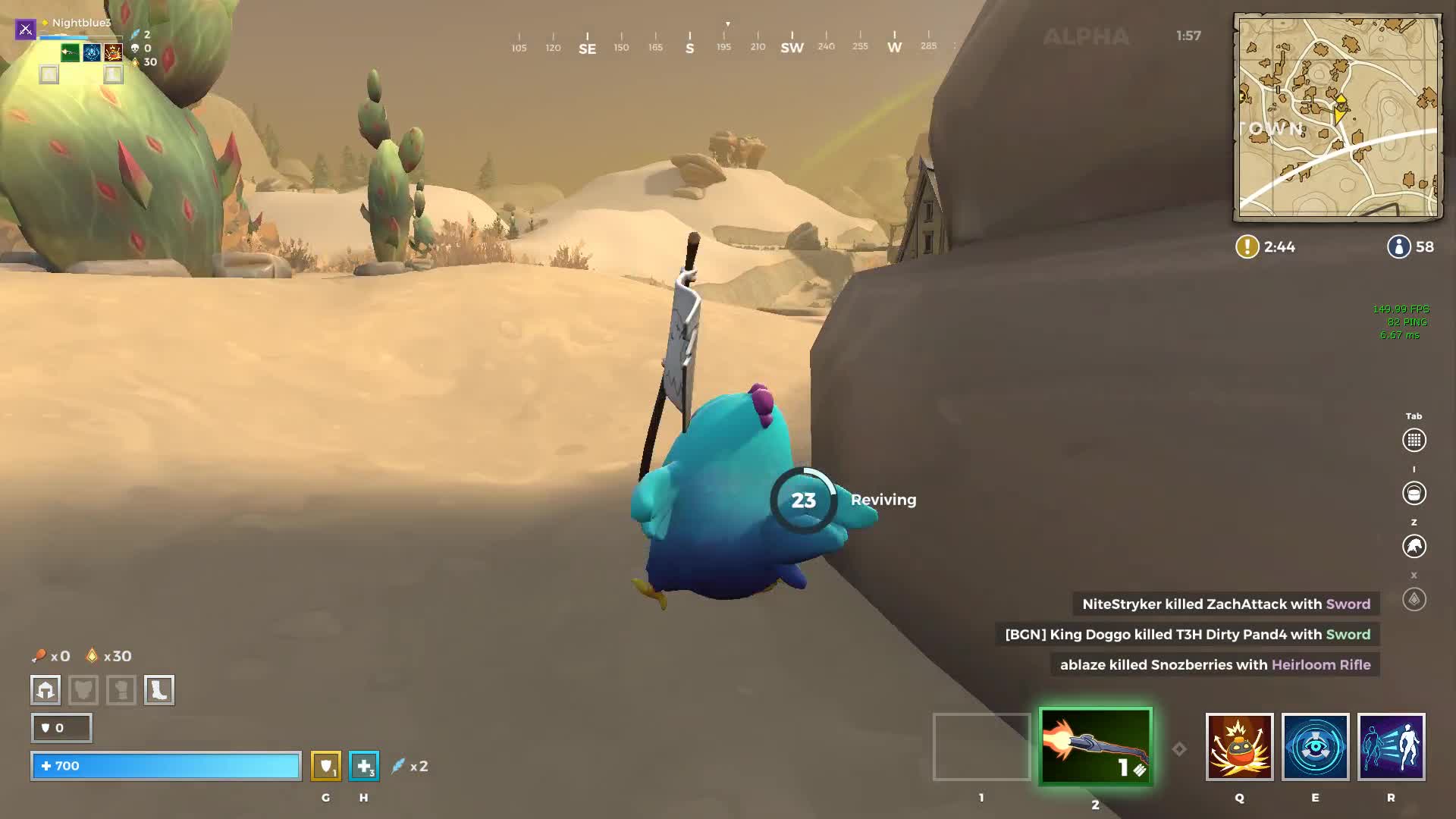 Realm Royale is in open alpha and currently available on Steam.