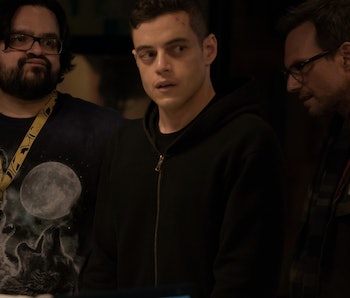 The pressure that’s been weighing on Elliot finally cracked him open in “eps1.3_da3m0ns.mp4.” Since we were first introduced to his double life, we’ve been privy to the morphine self-medication he did to maintain some sanity among this crazy split-existence. But after getting rid of his drug dealer’s supplier, he cut off his only supply for morphine and instead of trying to find another route, he’s decided to go clean — just at the exact moment when fsociety is about to start really going deep into their international hacking mission. Elliot chose the perfect time to try to go clean.

While the male side of the fscoiety team is off to upstate New York, eventually Elliot’s withdrawals get so bad that they need to find a place to stay. That’s where things get weird. The show opened with a detailed line of morphine with Elliot speaking about its effects on his life before eventually inhaling it. Thus, when the dream sequence began it should’ve been somewhat expected. But the show plays it so straight: Elliot screams for one last hit and Mr. Robot takes him to a drug dealer only for a shootout to breakout and for Elliot to see a fscoiety PSA on the TV. The entire sequence goes some strange places, but when he finally comes to and is worried about being all alone, Mr. Robot emerges from the shadows to let him know that he isn’t alone.

Elliot isn’t the only one that who discovers himself through extracurricular means. Two of the women in his life, Angela and his former drug dealer Shayla, go on one last party night before Shayla starts to reinvent her life again. Angela, who is growing distant from her Chris Pratt-lite boyfriend, goes to see Elliot but runs into Shayla, who is going on a dog walk, at which time Angela agrees to take some Molly in hopes it offers some clarity for her life. Shayla sees that Angela is constantly worried about everyone around her except herself and could use a little bit of an inward turn to make sure that her life is stable.

Not that the combination of drugs, hacking, and constantly grey sky aren’t exciting enough, but there is still the slow reveal that other hacker groups exist beyond fsociety and don’t quite share the same goals. Still, in the future is fsociety’s attempt to hack into E(vil) Corporation, which at the opening felt like a heist film had been sidetracked by a surreal dream sequence.