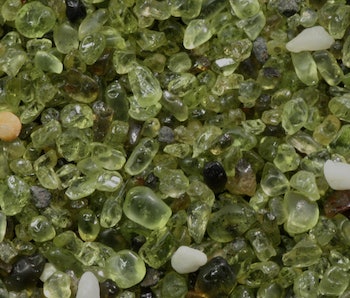 The scene around Hawaii’s Kilauea Volcano, now in its fifth week of intense eruption, has taken a turn for the surreal. Amid the ash-gray skies and flame-streaked lava spilling from the volcano’s fissures, tiny, glittering green gems are appearing — at times even raining from the sky. These tiny gems are not unexpected during such an eruption, but they’re nice to look at anyway.

On Twitter, residents of the Big Island posted photos of the green gems, which geologists call olivine. This name is actually a term for a whole family of similarly green gems, which also includes the more popular olive-green gemstone peridot. There’s nothing precious about the olivine subtypes bedazzling Kilauea’s lava and ash clouds, though. If you look closely, you can see the same tiny gems embedded in the rocks and asphalt all over Hawaii. Over time, those rocks can even get eroded into fine sand, creating stunning green beaches like Mahana Beach on Hawaii’s Papakolea coast.

What’s different about the olivine involved in the current eruption is that the gems aren’t engulfed by lava or encased in stone. Through the violent machinations of the eruption — explosive blasts from the volcano’s fissures — the stones are being set free.

Photos of the Kilauea gems posted to Twitter suggest they’re all quite tiny, and as such, they probably don’t pose that much of a danger to people in their landing path. But olivine, in general, is very hard — slightly harder than glass — so it’s probably a good thing people aren’t finding larger gems.

The abundance of olivine minerals in Hawaii, a volcanic archipelago, comes down to the elements swirling around in the magma beneath it. Olivine is made up primarily of magnesium, iron, silicon, and oxygen, and the combination of the latter three creates a class of mineral known as an iron silicate, which is one of the most common types of rock-forming minerals.

To jewelers, olivine gems with a dark olive color are the most valuable. But to be considered a semi-precious gemstone, a chunk of olivine must not only have the right color but also the right size, translucence, and hardness.

Volcanos have coughed up larger, more precious gems in the past — diamonds being the most notable — so the possibility remains that Kilauea’s eruption, after all the destruction that it’s caused, will have a silver (or at the very least green) lining.