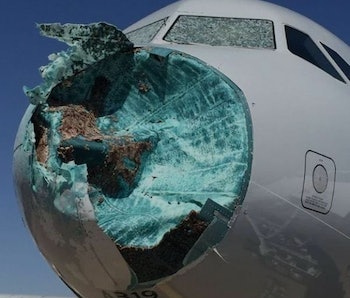 American Airlines Flight 1897 was forced to make a diverted landing earlier this week after encountering extreme weather. Hail pelted the aircraft severely to the point that its nose caved in and the windshields shattered. Photos of the incident were so shocking that they made their way to the top of the /r/WTF subreddit. But how did this happen and how common is it? A retired pilot explained to Inverse how the aircraft may have encountered the hailstorm to begin with.

“Hail encounter is rare because our weather radar does a good job of showing us where storms are, and are not, intense,” Tom Bunn, a retired United Airlines captain and author of a book about the fear of flying, told Inverse by email. Because hail can exist outside of clouds, a “powerful updraft in a thunderstorm can kick hailstones out the top into the clear air above the cloud.”

And he should know — he’s seen it first-hand himself.

“I had only one encounter with hail like that, and, indeed, after parking the plane, I saw that the black paint on the radome (the nose cone on the front of the plane covers the radar antenna) had been scrubbed off by the hailstones, exposing the fiberglass,” he said. Incidents like these may be incredibly rare but aren’t always unavoidable.

“Airlines set up policy that tells pilots to avoid thunderstorms by a certain number of miles, for example, ten miles,” Bunn said. “The problem is, if pilots avoided all thunderstorms by ten miles, they wouldn’t be able to complete most flights; it just isn’t practical to avoid stay ten miles from a thunderstorm at cruise. And when landing, it is often impossible to avoid flying into the edge of a thunderstorm, for the closer you get to the runway, the less latitude you have to go left or right to avoid a storm because you have to line up with the runway.”

American Airlines Flight 1897 departed San Antonio Sunday en route to Phoenix but was diverted to El Paso after sustaining damage as the result of the extreme weather, an American Airlines spokesperson told Inverse by email. The aircraft was carrying 130 passengers and five crew members, none of whom were hurt during the ordeal, though the Associated Press reported on Monday that the incident “caused some passengers to throw up.” The spokesperson said the aircraft is “being evaluated by our maintenance team.”

So, is the kind of damage sustained by American Airlines Flight 1897 likely to occur again? Bunn said that his encounter was the only one of its kind in 31 years of flying, adding, “It’s rare to have an encounter and even more rare to have damage.”

Rest assured that your next flight likely won’t be pummeled with unnaturally large ice spheres.