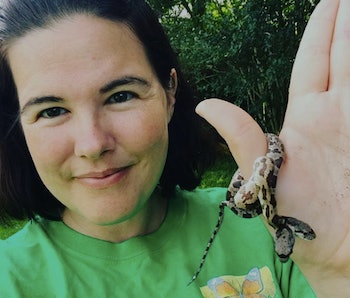 Tanee Janusz hit the biological lottery when a friend offered her a pair of conjoined twin snakes. Back in September, Janusz, a wildlife educator who’s certified as a master naturalist in Louisiana, jumped at the opportunity to care for the two-headed western rate snake. The snake(s?) ended up this way due to a birth defect in which two embryos failed to separate entirely during prenatal development.

This is the same way that conjoined humans or other animals are born; just as with other animals, conjoined snakes can share either a whole lot of organs or just a couple. In this case, the conjoined snakes ended up sharing almost all of their anatomy — digestive system, respiratory system, and so on — except they have separate heads and brains. So even though this specimen is a two-headed snake, it’s more accurate to refer to it as two conjoined snakes.

Cases of conjoined twins are extremely rare, occurring in fewer than two out of 100,000 births, but Newsweek reports that they’re a bit more common in snakes: around one in 10,000. Janusz refers to the pair as Filé and Gumbo, a nod to the local culture, and says that they have distinct personalities.

In fact, two brains sharing in one body can cause some serious drama. Whenever Filé and Gumbo move around, Gumbo often drags Filé along with it, Janusz tells WSLS (Filé still puts up a fight, though). Regardless, Janusz says caring for the twins is pretty much the same as caring for any other snake.

“The only difference is making sure that their water bowl is not too deep as the dominant head will drag the non-dominant head down into the water,” she tells Newsweek.

Usually, two-headed animals die quickly in the wild due to genetic issues or the simple mechanics of piloting a body with two heads. In the case of Filé and Gumbo, for instance, their heads are too close together for them to open their jaws wide enough to feed on whole rats as other members of their species normally would.

However, as Inverse previously reported, two-headed animals can occur in many species, just a few of which are mentioned below:

It’s not clear whether this carp suffered an injury or a genetic mutation, but the end result is similar to that of Filé and Gumbo: This abnormality certainly doesn’t make life any easier.

This two-headed California king snake actually survived and produced offspring in captivity, a rare feat for a multi-headed animal.

Like many conjoined animals born in the wild, this pair of conjoined porpoises died young.

Filé and Gumbo will probably be luckier, though, as western rat snakes can live over 30 years in captivity. As such, Janusz hopes they’ll live over a decade. In their short life so far, they’ve already been a big help in Janusz’s wildlife education outreach efforts, accompanying her to schools and other public events. She says that the strangeness of having two heads has helped otherwise timid observers get over their hesitations.

“The best thing is just letting people look at them,” Janusz tells Newsweek. “Their exceptionality makes people lower their guard down a little bit and makes them more open to talking about them.”